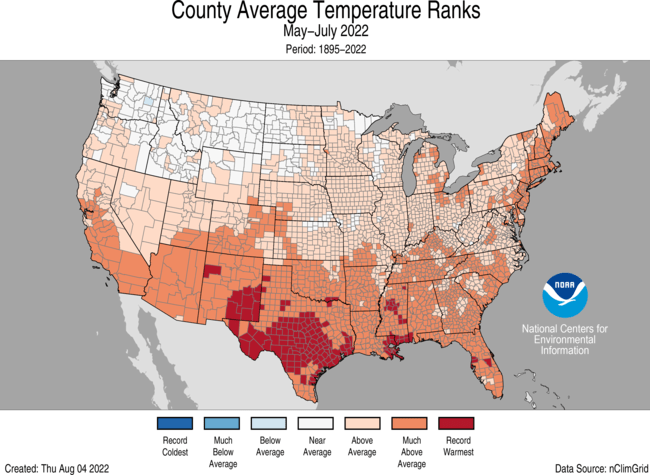 AUSTIN (KXAN) — When we look at the effects of La Niña here in Central Texas, those effects generally correspond to the weather we experience in the winter and spring.

Winter La Niñas tend to be warmer and drier, and spring La Niña has been shown to bring more tornadoes and hail to Central Texas.

This was a record hot summer for the Lone Star State, during our third year of La Niña.

So how much has La Niña contributed to our hot summer and what could La Niña mean for next summer?

Historically, when La Niña was underway during the months of May-July, there was only a minimal level of warming for Texas.

However, if you look at the years that La Niña was on the road in the winter… it had a much greater impact on warming temperatures from the following spring to summer, according to NOAA’s ENSO BLOG. Of course this is what happened this year… we had La Niña last winter and it was followed by a hot summer.

Why would a La Niña winter have a delayed impact on a Texas summer? It turns out that the drier and warmer winters typical of Texas La Niña are paving the way for the development of warmer summers.

The drier the soil is in winter and early spring, the easier it is to warm up in summer, further drying it out and exacerbating warming.

Not the whole story

The data suggests winters in La Niña are responsible for warming up to 0.5C in the following Texas summer, but the summer of 2022 was 2.1C above average, suggesting climate change and other influences also played a role. when adding more heat to the state.

Another thing to realize is that this connection does not happen every time. We had a La Niña winter 2020-2021 and yet the summer of 2021 was wetter and cooler. The summer of 2021 may have been more of an anomaly. A study looked at the 10 most extreme heat waves in Texas and found that eight of them had La Niña the previous winter.

La Niña is expected to continue this winter and possibly early next spring.

The latest ENSO forecast from the Climate Prediction Center expects conditions in La Niña to be favorable during the January-March period before transitioning to ENSO neutral in the February-April 2023 period.

For the very important December-February winter season, there is a 65% chance that La Niña conditions will persist.

Another La Niña winter? If that results in another period of warmer and drier weather in Texas, as is typical of the Texas winter of La Niña, then… you guessed it… this could give us another warmer-than-average summer next year.

Of course, we don’t expect La Niña conditions to continue next summer, but if the ground is drier after a warmer and drier winter, that could be enough to make for another hot summer for Central Texas.