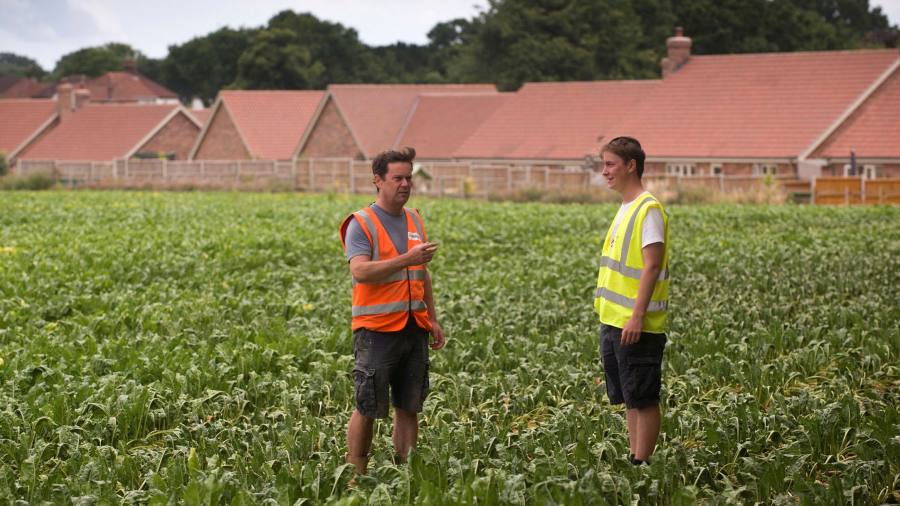 On the outskirts of Norwich in the east of England, developer John Ingram was standing in a sugar beet field where he wanted to build 10 family homes for a city that is struggling with a shortage of affordable housing.

Ingram’s plans were shelved in March due to government environmental regulations that aim to protect rivers and waterways from pollution by restricting the development of protected areas in England.

Ingram said he saw few viable ways to build something on the field because of the rules, and said other developers were affected by the same issue. “Others are in this together and are all going crazy,” he added.

Guidance from Natural England, a government agency, requires local authorities to limit pollution caused by housing projects, and has prompted municipalities to curb plans for more than 100,000 homes, according to the Home Builders Federation, a trade association.

Planning experts said the guidance exacerbated a chronic housing shortage in England, making it less likely that the government would comply with the Conservative party’s 2019 election manifesto to build 300,000 new homes in England each year by 2025.

The problems caused by the guidelines are beginning to be recognized in Whitehall and the Ministry of Environment, Food and Rural Affairs is working on a short-term solution, said people aware of the government’s deliberations.

Natural England issued its “nutrient neutrality” guidelines to 74 municipalities in England, encouraging them to set limits on the development of protected areas after a 2018 European Court of Justice ruling said it would be illegal to adding nutrients to soil that was already in poor condition.

The agency has targeted 74 areas across England as nutrients such as nitrates, phosphates and sulfates in the waterways were found to be dangerous and affecting habitats.

The advice was given to Norwich City Council in March and Ingram said it had “made everything we’re looking at impracticable”.

Ingram can only get planning permission for its development if the ‘nutrient load’ caused by the wastewater from the new houses has been ‘softened’ by a scheme to reduce the impact on local watercourses by the same amount.

Richard Kenyon, another small developer whose housing projects in Norwich are on hold due to Natural England guidelines, said the agency’s suggestion to create new wetlands to offset the impact of development was theoretically possible but prohibitively expensive. and impractical in reality.

“It’s not the goals that are the problem, it’s the implementation, and that comes down to Natural England and the government,” he added.

Dean Finch, chief executive of Persimmon, one of the nation’s largest homebuilders, told analysts this month that Natural England’s nutrient neutrality guidelines made it more difficult to obtain building permits and construction, “making not only a problem for us, but the whole industry a problem”.

Unless the government steps in to help builders deal with the impact of Natural England’s guidance, small and medium-sized developers were at risk of bankruptcy, said Richard Blyth, head of policy at the Royal Town Planning Institute, the professional body for the planning industry.

“Of course England may be enforcing the law with the best of intentions, but the current situation is just not practical,” he added.

David O’Leary, policy director at the Home Builders Federation, said Natural England’s guidance had “turned into something they can’t hold on to now”.

The advice will cause larger developers to halt projects in affected areas and push them to look elsewhere for land where they can more easily develop, he added.

O’Leary said Natural England’s guidance particularly annoyed developers, as it was the farming sector, rather than new homes, that added most of the nutrients to England’s waterways as a result of fertilizers and animal slurry ending up in watercourses. .

Water companies are also taking some of the blame for polluted waterways, according to developers. A highly critical report published last week by the Environment Agency, a watchdog, accused water company bosses of allowing “shocking” pollution to take place.

Richard Broadbent, a director at the law firm Freeths who was head of legal services at Natural England when the nutrient neutrality guidelines were drafted, said the developers’ frustration was understandable.

“I totally understand the sense of injustice about it because it’s not development that has historically caused this problem — it’s intensive farming that goes untracked, so you have sites that fail,” he added.

The issue highlights the tension between two core elements of the government’s vision for post-Brexit Britain.

Ministers have committed to achieving net zero carbon emissions by 2050 and have put forward a radical vision for agricultural policy, valuing land based on its environmental benefit rather than just its output, to help achieve that goal.

But the government’s environmental goals — which include boosting biodiversity and carbon sequestration and penalizing pollution — are blocking the kind of development essential to the Conservatives’ pledges to ‘upgrade’ underperforming regions and build more housing.

Defra said that while Natural England’s nutrient neutrality directive was an interim solution, the government wanted to tackle the fundamental sources of pollution for protected sites.

“We will continue to work closely with people in areas affected by excess nutrients,” it added. “We are committed to taking action to reduce the mitigation burden so that communities can get the homes they need and will be taking next steps shortly.”