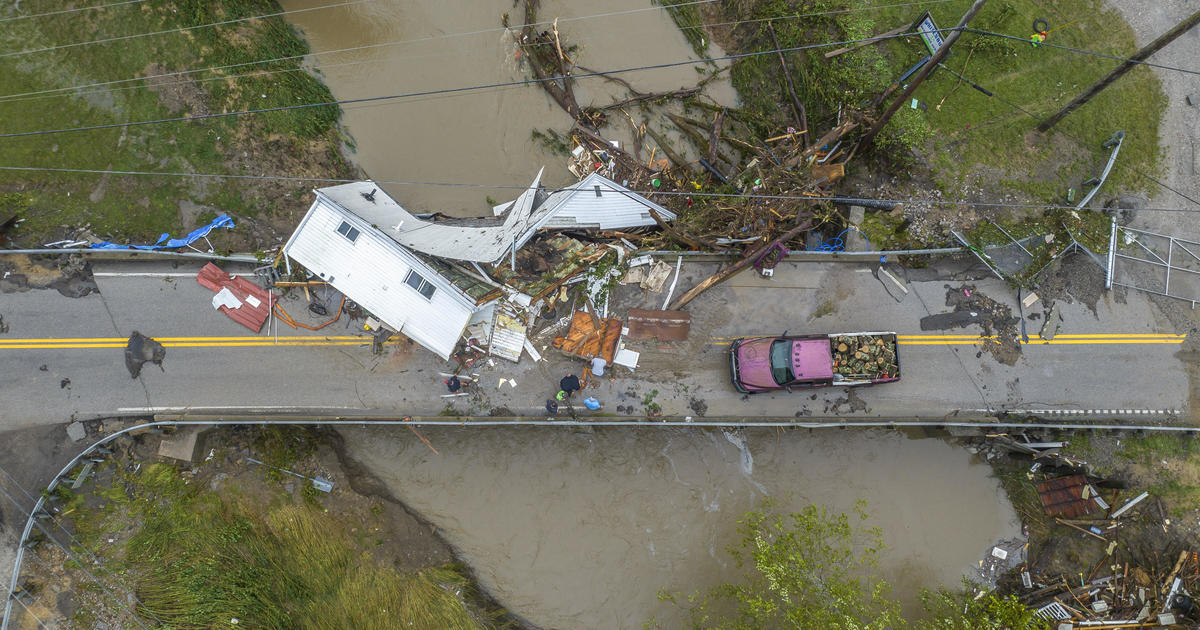 Search and rescue teams, supported by the National Guard, searched Friday for missing people in record flooding that wiped out entire communities in some of the poorest places in America. Kentucky Authorities said at least 19 people have died, a toll the governor said he expected to grow, adding it could take weeks to find victims.

Governor Andy Beshear said 16 people died and at least six children were among the victims. Among those who died were four children from the same family in Knott County, the county coroner said Friday.

“That’s difficult,” the governor told reporters at a briefing Friday afternoon. “It’s even harder for those families and those communities, so keep praying. There are still many people, still many people who are missing. We’re going to do our best to find them all.’

Beshear said earlier Friday that the death toll would be “much higher”. He said later officials could update the number of fatalities “for the coming weeks”.

Violent floods swallowed up towns that encircle creeks and streams in the valleys and hollows of the Appalachians, flooding homes and businesses, leaving vehicles in useless piles and crushing runaway equipment and debris against bridges. Mudslides caused people to land on steep slopes and thousands of customers were without power.

The water flowed so hard and fast through the area that residents, many still recovering from the last flood, barely had time to get out.

Emergency services conducted nearly 50 aerial rescues and hundreds of water rescues on Thursday, with more people still in need of assistance, the governor said. “This is not only an ongoing disaster, but also an ongoing search and rescue operation. The water in some areas will not rise until tomorrow.”

More than 290 people have sought shelter, Beshear said. He deployed National Guard soldiers in the hardest hit areas. Three parks set up shelters and with the property damage so extensive, the governor opened an online portal for donations to the victims. President Biden called to show his support for what will be a lengthy recovery effort, Beshear said, predicting it will take more than a year to fully rebuild.

“It’s the worst we’ve had in a long time,” Chris Friley, Breathitt County’s director of emergency management, told WKYT-TV. “It’s the whole country again. There are several places that are still inaccessible to rescue teams.”

Perry County broadcasters told WKYT-TV that floods washed away roads and bridges and knocked houses off foundations. The city of Hazard said rescue teams were out all night, urging people on Facebook to stay off the road and “pray for a break in the rain.”

Also Mr Biden declared a federal disaster to send relief money to more than a dozen counties in Kentucky, and the Federal Emergency Management Agency appointed an officer to coordinate the recovery.

Beshear had planned to tour the disaster area on Friday, but postponed it because conditions at an airport where they planned to land are unsafe, his office said. Later in the day he got to see the flooding aboard a helicopter. He tweeted that “the situation is even more devastating to see firsthand” and said it will be “a long road to recovery”.

More rain on Friday hit the region after days of heavy rainfall. The storm caused water to spill down the slopes and spill out of the riverbeds, flooding roads and forcing rescue crews to use helicopters and boats to reach trapped people. Floods have also damaged parts of West Virginia and South West Virginia, in a region where poverty is endemic.

“There are hundreds of families who have lost everything,” Beshear said. “And many of these families didn’t have much to begin with. And so it hurts even more. But we’ll be there for them.’

Poweroutage.us reported that more than 31,000 customers were without electricity Friday night in eastern Kentucky, West Virginia and Virginia, with most of the power outages in Kentucky.

The National Weather Service said another storm front is adding misery to flood victims in St. LouisMissouri, Friday could bring more thunderstorms to the Appalachians early next week.

Brandon Bonds, a weather service meteorologist in Jackson, Kentucky, said the worst-hit areas of eastern Kentucky received between 8 and 10 1/2 inches over a 48-hour period ending Thursday. Some areas received more rain overnight, including Martin County, which was crushed by another 3 inches or so, triggering another flash flood warning on Friday.

The North Fork of the Kentucky River rose and broke records in at least two places. A river gauge registered 20.9 feet in Whitesburg, more than 6 feet above the previous record, and the river hit a record 43.5 feet in Jackson, Bonds said.

Krystal Holbrook had had enough on Thursday as her family ran through the night to move vehicles, RVs, trailers and equipment as the rapidly rising waters threatened Jackson. “Higher ground is going to be a little hard to find,” she said.

“We don’t know exactly the full damage because we didn’t enter the building safely or really got too close,” said Meredith Scalos, the communications director. “We do know that some of our archival materials from the building poured into the streets of Whitesburg.”