The German government has passed a law allowing it to take stakes in companies crippled by the rising cost of imported gas as tensions with Russia threaten to plunge the country’s electricity sector into crisis.

The law, which could be passed by the German parliament as early as this week, would pave the way for the government to bail out Uniper, Germany’s largest importer of Russian gas.

The amended Energy Act would also allow importers to pass on the higher costs of the gas they purchase on the spot markets to all their customers, thus avoiding insolvency.

“Gas has become a scarce resource and in the current situation we need to make all options available in case of emergency and expand our toolbox again,” said an official, explaining the measures.

The goal, officials say, is to prevent a repeat of 2008, when the Lehman Brothers collapse swept through the entire financial market and sparked a global crisis.

The German energy sector has been in turmoil since mid-June when Russian state-controlled gas exporter Gazprom cut gas flows through the Nord Stream 1 pipeline under the Baltic Sea by 60 percent.

NS1 will undergo scheduled maintenance between July 11 and July 21, and many in the government fear gas flows may not resume after repairs are completed as the economic war between Russia and Germany escalates. 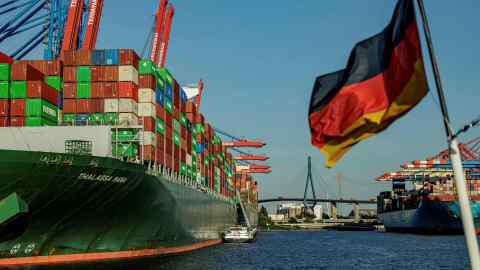 Officials have already warned that gas may need to be rationed to industrial customers this winter if Germany fails to fill its gas storage facilities quickly enough for the cold season.

Deprived of Gazprom supplies, importers have been forced to source gas on the spot market at much higher prices. However, they have not been able to pass these increased costs on to their customers, most of whom receive their gas on long-term, non-renegotiable contracts.

“If energy companies cannot afford the high prices or meet their contracts, they will face financial difficulties up to and including insolvency,” the official said. “But if [they] collapse, which could lead to a serious collapse of the entire market, from the supply chain to the end consumer.”

Uniper, which issued a profit warning last week and said it was in talks with the government about a bailout, is the biggest victim of the crisis so far.

It said the talks focused on “stabilization measures”, including guarantees, an increase in the current credit facility granted at the beginning of the year by state bank KfW, or the state taking a stake in the company.

Most analysts think Berlin will bail out Uniper, with a package expected to be around €9 billion. The rescue deal could be modeled after the assistance provided by airline Lufthansa during the pandemic.

Under the proposed amendments to the energy law, the German state could take stakes in ailing companies “of critical infrastructure in the energy sector”, as well as in banks affected by the global financial crisis and during the Covid-19 pandemic. As part of Lufthansa’s bailout, the state took a 20 percent stake in the airline.

The amended law also includes a new “price adjustment mechanism” designed to “maintain supply chains as long as possible and avoid cascading effects,” the official said. It would essentially allow companies to pass on the extra costs of purchasing gas in spot markets by levying a levy on all their gas customers.