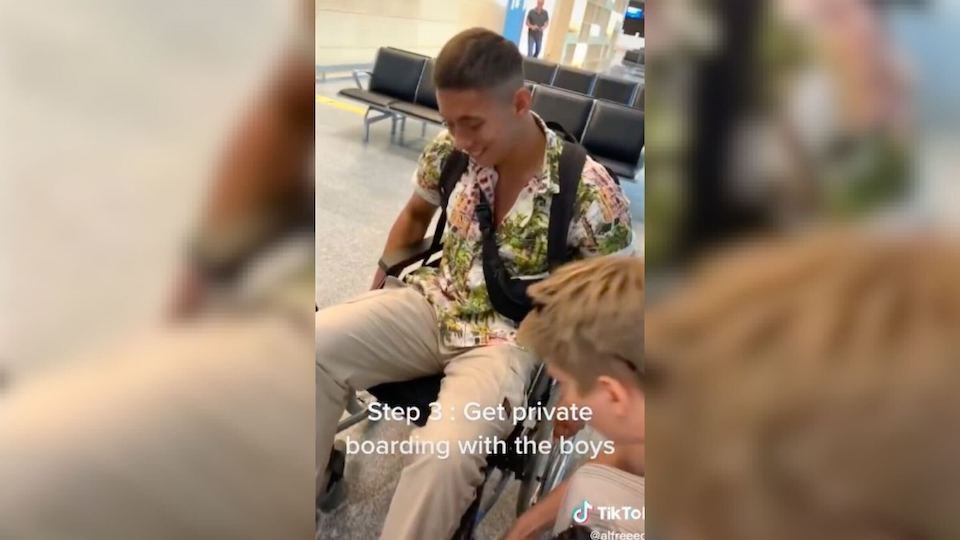 The travelers have access to wheelchairs, making them unavailable to people who really need them.

A disturbing new trend on TikTok suggests airline passengers are doing fake injuries to avoid having to wait in lines at airports around the world.

A few videos on the social media platform show people bragging about asking for wheelchairs at airports so they can skip queues. In some cases, the airline passenger pretending to be injured was accompanied by a group of travelers, allowing the entire party to skip the line.

“Passengers should ensure that they are at the airport and at their gate at the recommended times as published by both airports and airlines,” the airline said.

WestJet spokesperson Denise Kenny told VIA that the airline is not aware of any incidents of the trend on its flights and “would not tolerate guests taking advantage of the accessibility accommodations we have for our guests who need them.”

The airline acknowledges that travelers face delays when Canadians return to travel and thanks guests for their “continued patience,” it added.

A young traveler said he received “VIP treatment” at Finland’s Helsinki International Airport in four steps by letting his friend use a wheelchair when he didn’t need it.

The man writes in a TikTok video that the first step is to get a friend to sit in a wheelchair. After this, he pushes his friend back and forth and brags about getting “priority boarding with the boys”.

But the young airline passenger is not alone in his efforts. Several other videos have surfaced showing people using similar techniques around the world.

Another TikToker says he pretended to hurt his leg by taking off a sock so he could quickly get through security after a fun party.

The traveler shared a video of himself in a wheelchair wearing a cat-sized Chesire grin with a “hang off” hand sign. He also called the incident a “joke” and “funny.”

In another incident, a woman writes in a TikTok video: “If you ask for a wheelchair so that you and your… [expletive] can skip the line”

In a previous statement to THROUGH, the transport minister’s office said Canada is taking airport delays “seriously” and will continue to work with its partners to ensure a streamlined process for travelers.

“To date, more than 1,500 CATSA screening officers have been hired across the country. As noted in our recent statement, while delays certainly remain, the average wait time for passengers, for example between July 21-25, is improving by 81 [per cent] of travelers screened in less than 15 minutes at Vancouver International Airport.

“We will continue to work with airports and airlines to ensure bottlenecks are addressed at every point of the passenger journey.”