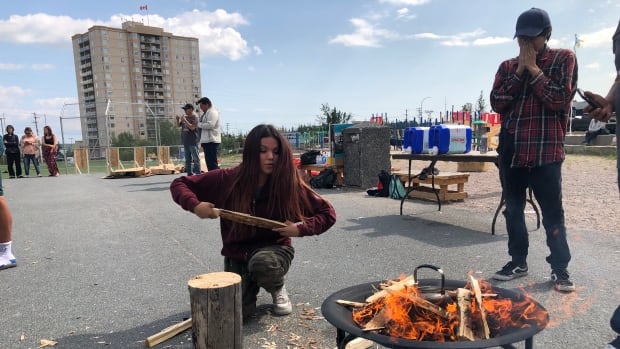 About 50 youth and adults gathered around a table on Saturday in the field of the Weledeh Catholic School in Yellowknife to watch Irene Sangris, an elder and knowledge holder at the Dechinta Center, demonstrate how to cut whitefish caught by her husband Charlie. .

This was the first time the event was offered as part of the Indigenous Summer Games.

Running from June 30 to July 3, the games brought together athletes from all over the North, including the Yukon and Alaska.

Carson Roche, the event manager for the games, explained that the fish-cutting event showcased traditions from different areas.

“You saw a lot of cool styles. We had a lady from Paulatuk who used an ulu to make dry fish and she was so smooth and smooth with her cutting,” Roche said.

Lorna Storr, is an elder from Aklavik, NWT, an athlete and longtime competitor in Dene games, she attended the games as an officiant and participant.

Cutting the fish was exciting for her.

“It’s a new event and I’m in, which makes it interesting because I’m not an expert,” she said.

Storr is an expert in tea cooking, where she quickly and smoothly chops wood, lights matches and boils water, while also guiding others.

“I’m super proud of myself and it was super fun because for me my dad taught me how to make a fire when I was five years old or something. And so I texted him right away and I was like, ‘guess what? what? I just did that,” she said with a laugh.

Knuckle hop was another game held during the events.

Fort Simpson’s Chris Stipdonk is the world record holder for the knuckle hopping, setting it at the 2020 Arctic Winter Games. He beat that record at the Indigenous Summer Games, jumping over 206 feet.

Roche said he was “pretty emotional” after the event ended.

“I’m just humbled, honored that all these athletes participated in our event,” he said.

But he also knows that it won’t be the last, the next one will take place in two years, probably in the same location. But there are plans to move the location.

“I like the location, the locations are very nice, but I wouldn’t mind doing it in a more traditional landscape,” he said.

Roche said he hopes to hold winter games at some point and expand one day so the communities can host.