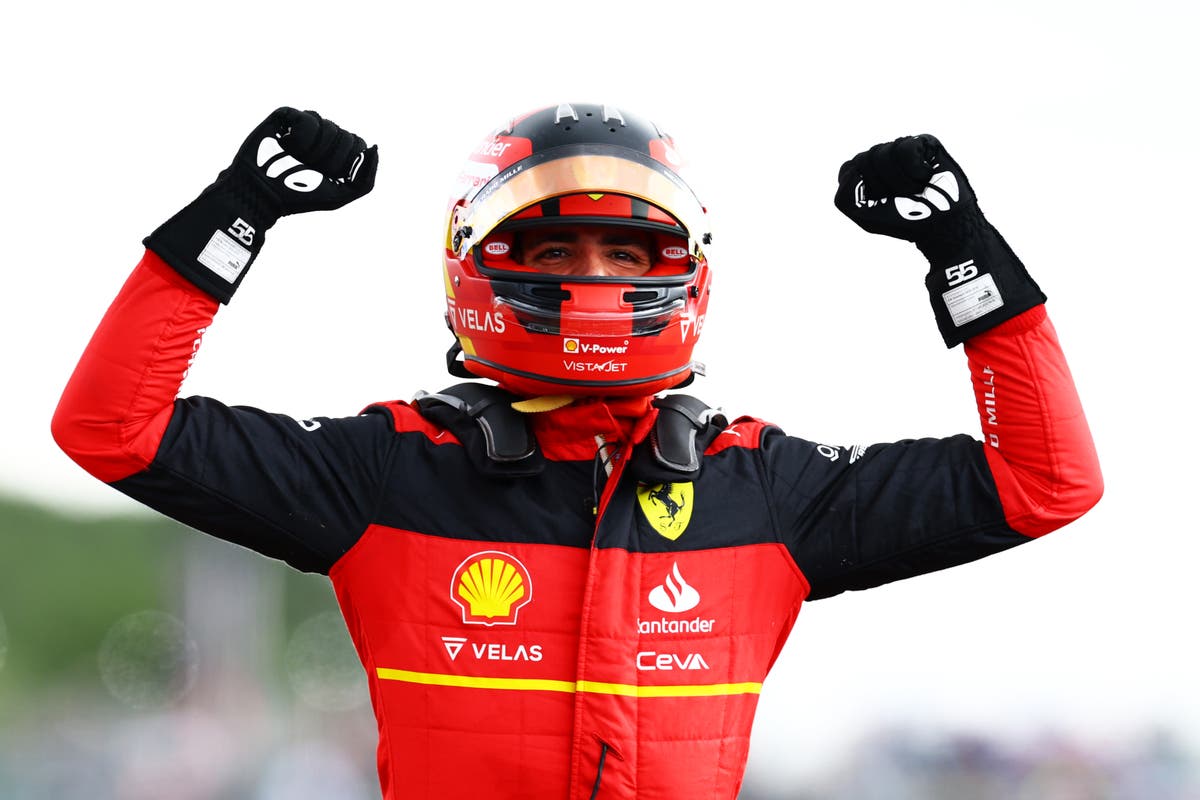 Carlos Sainz won a wild and wacky British Grand Prix in which Zhou Guanyu survived a horror crash on the opening lap and protesters burst into the Silverstone circuit.

Sainz fought his way past Ferrari teammate Charles Leclerc in a brilliant 10-lap shootout to the checkered flag after a safety car period to claim his first Formula 1 win. Sergio Perez finished second, with Lewis Hamilton third after making his way around Leclerc with four laps of the 52 laps remaining.

Sainz, Perez and Hamilton all put on new tires for the safety car restart, but Ferrari left Leclerc on old rubber and the championship challenger was left in no man’s land, dropping from first to fourth place and sharing its title hopes a opportunity. blow on a day when Max Verstappen stumbled home seventh after suffering a flat tire and damage to his Red Bull bodywork. A record 142,000 fans in Northamptonshire were treated to the race of the season, which got off to an extraordinary start.

Rookie Zhou was approaching the 160kph opening Abbey corner when British driver George Russell tapped the right rear of the Chinese driver’s machine, sending it onto its roof and slipping out of control. Upside down, Zhou drove through the gravel at high speed and sparks flew away before slamming into the tire barrier and being launched into the fencing. Fans and photographers ducked for cover with Zhou’s Alfa Romeo on its side, between the tire wall and the fencing.

An extraction team rushed to Zhou and the 23-year-old, in just his 10th race, was carefully removed and taken to the medical center in an ambulance before being discharged. Russell was also seen rushed to check on his friend Williams driver Alex Albon, who was involved in the accident, and then to Zhou’s condition. “I’m glad Zhou is okay. It was a horrible incident,” Russell told Sky Sports. The Mercedes driver, who was not allowed to restart the race, added: “I jumped out of the car to see that Zhou was okay. When I got back to the car , I couldn’t restart it. Once you get outside help, you can’t restart the race.”

Carlos Sainz made clear his joy and gratitude after winning Sunday’s British Grand Prix, a first win for the Spaniard on the Formula 1 circuit in what was his 150th race start.

The Ferrari man was on pole position at Silverstone, although his lead initially only lasted a few seconds as Max Verstappen bypassed him en route to the first corner – but a massive crash behind them meant a restart from the original positions.

Even then, an exciting race caused so many twists and turns that both Charles Leclerc and Lewis Hamilton also took the lead in several stages, before a Safety Car came out in the closing stages that proved crucial.

Red Bull’s Sainz, Hamilton and Sergio Perez all immediately pitted to switch to soft tyres, while then-leader Leclerc was left on hard tyres, with the crammed group producing a thrilling final with Perez finishing second and Hamilton third.

However, it was Sainz who triumphed, noting the “special” role Silverstone had played so far in his career in a celebratory speech after the race.

Zhou Guanyu admits the halo ‘saved him’ after a ‘horrific’ crash during the first lap crash of the British Grand Prix.

The Alfa Romeo driver’s car flipped upside down and slammed into the guard gate in front of thousands of shocked fans.

The F1 rookie crashed into the Abbey corner approaching 160mph when George Russell made contact with the rear of Zhou’s car, which saw him launch onto its roof and spiral out of control.

After Zhou drove through the gravel and came to a thumping stop at the tire barrier, Alfa Romeo confirmed the driver was “conscious” and “talkative” after receiving medical treatment.

And the Chinese driver sent a message to his fans on social media: “It’s going well, everything is clear. Halo saved me today. Thank you everyone for your sweet messages!”

Time for the stage!

Sainz looks a very proud and happy man on top!

“I really have to hand it over to this audience, thank you everyone for the incredible support. We don’t see this everywhere in the world. I gave everything today, I tried to chase those Ferraris. We have to keep pushing!”

“We lost time in the pit stop and then I was chasing. The end there was difficult with a Red Bull behind them. This is a huge bonus for us to be on the podium. I’m glad everyone was safe with the big crash earlier in the day.”

“It was a great comeback, we didn’t give up. The opportunity came at the end and we took it, it was a great fight with Charles and then with Lewis. It was epic final laps…”

Carlos Sainz, in his press conference after the race:

‘I don’t know what to say! It is awesome! First race win, 150 later, with Ferrari at Silverstone! It’s a very special day that I will never forget!

“It wasn’t easy, I struggled with the balance with medium tyre. I kept believing I had to stay in the race. You can imagine the nerves of that safety car restart to get it right.

An absolute thriller at Silverstone!

What a stunningly brilliant and entertaining race – it just had everything!