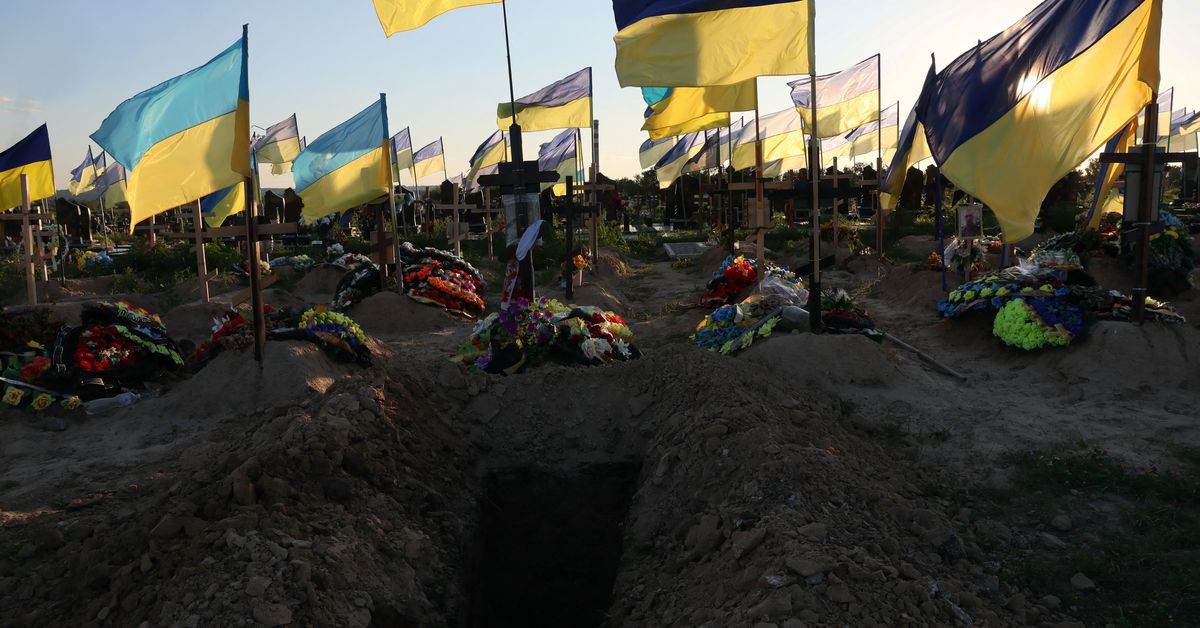 KYIV/KONSTYANTYNIVKA, Ukraine, July 3 (Reuters) – At least three people were killed and dozens of homes damaged by explosions in the Russian town of Belgorod near the border with Ukraine, the regional governor said on Sunday, as Ukrainian troops attacked a Russian army. base in occupied southern Ukraine.

Belgorod Governor Vyacheslav Gladkov reported several explosions in the city of nearly 400,000 people, some 40 km north of the border with Ukraine. read more

At least 11 apartment buildings and 39 houses were damaged, including five that were destroyed, Gladkov said on the Telegram messaging app.

“The noise was so strong I jumped up, I woke up, got really scared and started screaming,” a resident of the city told Reuters, adding that the blast happened around 3am (0000 GMT)

“The missile hit residential buildings about 20 meters from my house,” the resident said. “All the windows in our house were shattered, the doors were crooked.”

“The deaths of civilians and the destruction of civilian infrastructure in Belgorod are a direct act of aggression on the part of Ukraine and require the most serious – including a military – response,” Klishas wrote on Telegram.

Moscow has accused Kiev of numerous attacks on Belgorod and other regions bordering Ukraine since the Russian invasion of February 24. Ukraine has not claimed responsibility but has described the incidents as revenge and “karma” for Russia’s actions.

There was no immediate comment from Ukraine and Reuters was unable to independently verify the Russian accounts.

In the Russian-occupied city of Melitopol in southern Ukraine, Ukrainian troops hit a military base with more than 30 strikes on Sunday, the exiled mayor of the city said in a video address to Telegram.

The base was “disabled,” said Ivan Fedorov.

An official installed in Moscow said several private residences near the airport were damaged.

“Branches fell on the territory of the airport. There were no casualties,” Evgeny Balitsky, head of the Russian-installed council in the southern Zaporizhzhya region, wrote on Telegram.

The General Staff of the Ukrainian Armed Forces said the Air Force had flown some 15 missions “in virtually all directions of hostilities”.

“About 20 units of enemy equipment and two field ammunition depots were destroyed.”

Reuters was unable to immediately verify the accounts.

Thousands of civilians have been killed and cities razed to the ground since Russia invaded Ukraine in what its Western allies say is an unprovoked war of aggression. Russia denies targeting civilians in what President Vladimir Putin calls a “special military operation” to demilitarize and “denazify” its neighbor.

A new hole is seen ahead of a burial, among dozens of recent graves of people killed since the start of the Russian invasion, in the Walk of Heroes section of the cemetery, which is home to those who served as soldiers, firefighters and police officers. buried, as Russian attack continues, in Kharkiv, Ukraine, July 2, 2022. REUTERS/Leah Millis

Russia aims to expel Ukrainian troops from Luhansk and Donetsk provinces in the Donbas, where Moscow-backed separatists have been fighting Kiev since Russia’s first military intervention in Ukraine in 2014.

“The Russians are strengthening their positions in the Lysychansk area, the city is on fire,” Luhansk governor Serhiy Gaidai said on Telegram. “They attacked the city with inexplicably brutal tactics.”

Rodion Miroshnik, ambassador to Russia of the pro-Moscow self-proclaimed Luhansk People’s Republic, told Russian television: “Lysychansk has been brought under control”, but added: “Unfortunately, it has not yet been liberated.”

Russian media showed video of Luhansk militias parading in the streets of Lysychansk, waving flags and cheering, but spokesman for the National Guard of Ukraine, Ruslan Muzychuk, told Ukrainian television that the city remained in Ukrainian hands.

“Now there is heavy fighting near Lysychansk, but fortunately the city is not surrounded and is under the control of the Ukrainian army,” Muzychuk said.

Reuters could not independently verify the battlefield records.

Oleksiy Arestovych, an adviser to Ukrainian President Volodymyr Zelenskiy, said Russian troops had finally crossed the Siverskiy Donets River and were approaching the city from the north.

“This is indeed a threat. We’ll see. I’m not ruling out some outcomes here. A lot more will become clear in a day or two,” he said.

“The more western weapons that come out, the more the picture changes in favor of Ukraine.” Ukraine has repeatedly asked for more weapons from the West, saying its armed forces are severely outnumbered.

Troops who had interrupted the fighting in Konstyantynivka, a market town about 115 km (70 miles) west of Lysychansk, said they had managed to keep the supply road to the embattled city open despite Russian bombing.

“We still use the road because we have to, but it’s within artillery range of the Russians,” said one soldier as his comrades relaxed nearby, munching on sandwiches or eating ice cream.

“The Russian tactic at the moment is to shell every building we can find ourselves in. Once they destroy it, they move on to the next,” he said.

Far from the fighting in the east, Russia said it had hit army command posts in Mykolaiv near the vital Black Sea port city of Odessa, where the mayor had reported several powerful explosions on Saturday.

Ukrainian authorities said Friday that another rocket hit an apartment building near Odessa, killing at least 21 people. A shopping center was hit in the central city of Kremenchuk on Monday, killing at least 19.