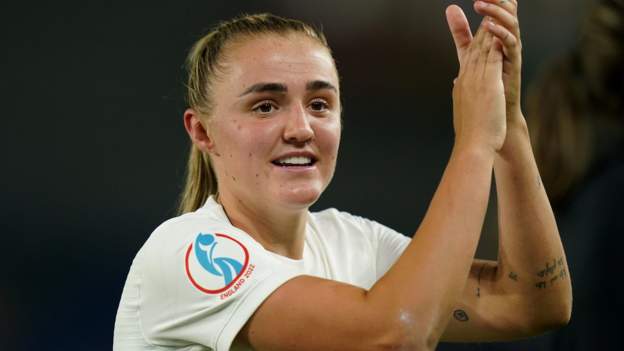 England midfielder Georgia Stanway says many men from the national team have reached out to offer advice and look for Euro 2022 final tickets.

The Lionesses face Germany at Wembley on Sunday in their bid to become the first English team to win a major trophy since the 1966 men’s World Cup.

“Many of the English men have contacted us to wish us well and ask if they can get a ticket,” said Bayern Munich’s 23-year-old Stanway.

The men’s team lost the final of the European Championship 2020 last summer on penalties against Italy, also at Wembley.

“They’ve been with us and just gave us all the information they can,” added Stanway. “They got to this point last year and we’re just trying to make sure we can do even better.

“We’ve had so much support, be it football players, people around the hotel and it’s amazing how many people actually recognize us.”

England’s Euro 2022 4-0 semi-final win over Sweden was watched by a peak television audience of 9.3 million – the biggest of the tournament so far.

Tickets for Sunday’s showpiece at Wembley – with a capacity of 87,200 – are sold out.

That makes it the most attended Euro match ever for men or women.

“It’s a good job that I can’t see any of them. My eyes are on the ball, that’s where we are now.

“We’re just reaching new levels every time. Even if England don’t play, the ratings are ridiculous.

“It makes us go out, play with a smile on our face. The most important thing [boss] Sarina Wiegman has said he was at the beginning – ‘play for the little girl who wanted to be in our shoes’.

“So I play for the little girl who wanted to play at the start, went to practice, loved it and dreamed of being in our position.”