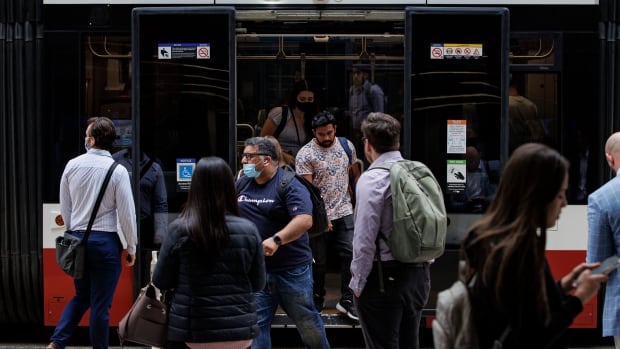 More than two years after COVID-19 first struck, Toronto is not yet back at half its level of pre-pandemic activity, lagging behind many cities in North America, according to a new study.

A joint project between the University of Toronto and the University of California, Berkeley called “Death or Downtown?” compared the activity of mobile devices in 62 metropolitan cities between March and May this year, against the same time frame in 2019.

The survey found that downtown Toronto had regained only 46 percent of its pre-pandemic activity levels — about the same as Calgary, New Orleans and Oakland, California — placing it 52nd on the list.

Most Canadian cities did it the same way, all reaching between 43 and 56 percent of pre-pandemic activity levels.

An important factor is that Canada has been slower to get out of the COVID-19 lockdowns and restrictions, said study co-author Karen Chapple, director of the School of Cities at the University of Toronto.

“People went home to Omicron,” she said, referring to the massive wave of infections caused by the Omicron variant of the novel coronavirus that spread across the world in late 2021.

“So that delayed the comeback,” Chapple told CBC Toronto.

The only Canadian outlier was Halifax, which reached 72 percent.

“Halifax is the number one comeback city in Canada,” said Chapple. “We think it’s because of all the new residents that came in… They work from home, but they live downtown.”

She said Toronto is best compared to a place like New York City, which serves the same function in the US as Toronto in Canada. But New York City has recovered much faster and was at 78 percent of pre-pandemic activity this year.

Downtown Toronto has many professional service workers in places like law firms and insurance companies, who don’t necessarily require a return to office, Chapple said.

“[New York] has a much more diverse economy, and I think that’s one of the most important lessons here,” Chapple said.

Marcy Burchfield, vice president of the Economic Blueprint Institute at the Toronto Region Board of Trade, agreed that the city’s pandemic restrictions — one of the most prolonged and severe in North America — are partly responsible for the slow recovery. . She said the institute’s findings have shown that the trajectory of a city’s recovery is directly related to the length of the lockdowns.

However, she said the city saw a 30 percent increase in foot traffic in July.

“We’re just seeing the recovery really going up and down; you can see the vibrancy on the street, and that’s just going to continue,” Burchfield said.

Toronto Mayor John Tory said in a statement to CBC News that the main reason for the city’s slow recovery could be a slow return to personal work, especially at larger companies with downtown offices.

He also said the labor shortage has also made it difficult for companies to set rules for employees, instead trying to offer incentives.

“By definition, this is a slower process, but it reflects the fact that a stricter approach could cause some of those same employees to change jobs,” Tory said.

Workers report high satisfaction on returning to the office just three days a week, Tory said, which he says will only increase in the fall. He also said passenger numbers on public transport are back at 60 percent of pre-pandemic levels and pedestrian numbers continue to rise, based on city traffic data.

Tory said the future of work will be a “main focus” of the city’s pandemic recovery plan, which includes consultations with an advisory panel of Toronto business leaders. Their first meeting is on August 16.

“This is of particular importance for the economic recovery of the inner city – we need to take a serious look at the future of work and make sure we adapt to it and make sure our inner city also adapts,” he said.

Chapple said it’s early days, and she’s optimistic Toronto will eventually return to where it was before COVID-19.