Former US President Donald Trump has written an op-ed and tribute to the late Queen Elizabeth II, and added his byline to the British newspaper the Daily Mail.

In the tribute, Trump described his own meeting with the Queen as “the most extraordinary honor of my life”.

“The whole civilization is in mourning,” he wrote.

“The passing of Queen Elizabeth II, the enlightened monarch who ruled the United Kingdom for 70 years, is a loss felt by billions of people around the world.”

Trump described a meeting with the Queen along with his wife, Melania at Buckingham Palace, noting, “Her Majesty had a sharp mind, missed nothing and always knew exactly what to say.”

“During our unforgettable State Dinner three years ago, we got along very well, talking all evening.”

Trump described the monarch as the “personal embodiment of nearly a century of British history”.

“In the face of all adversity, she embodied the uniquely British hallmark of a determined and calm decision,” he said.

“By her example, we saw what it means to be British – a people strong and steadfast, wise and just, noble and majestic; a people serious but good-humoured; proud but just; and indeed a people who be a blessing to the whole world. 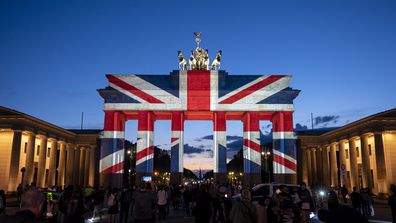 How the world reacts to the death of the Queen

“That was Queen Elizabeth, and that’s the United Kingdom. She was Britain at its best.

Trump claims that when asked about her favorite British Prime Minister, Queen Elizabeth replied that “she liked them all”.

He expressed his support for the Queen’s newly appointed successor, King Charles, adding: “It will take time for us to fully absorb the magnitude of this loss.”