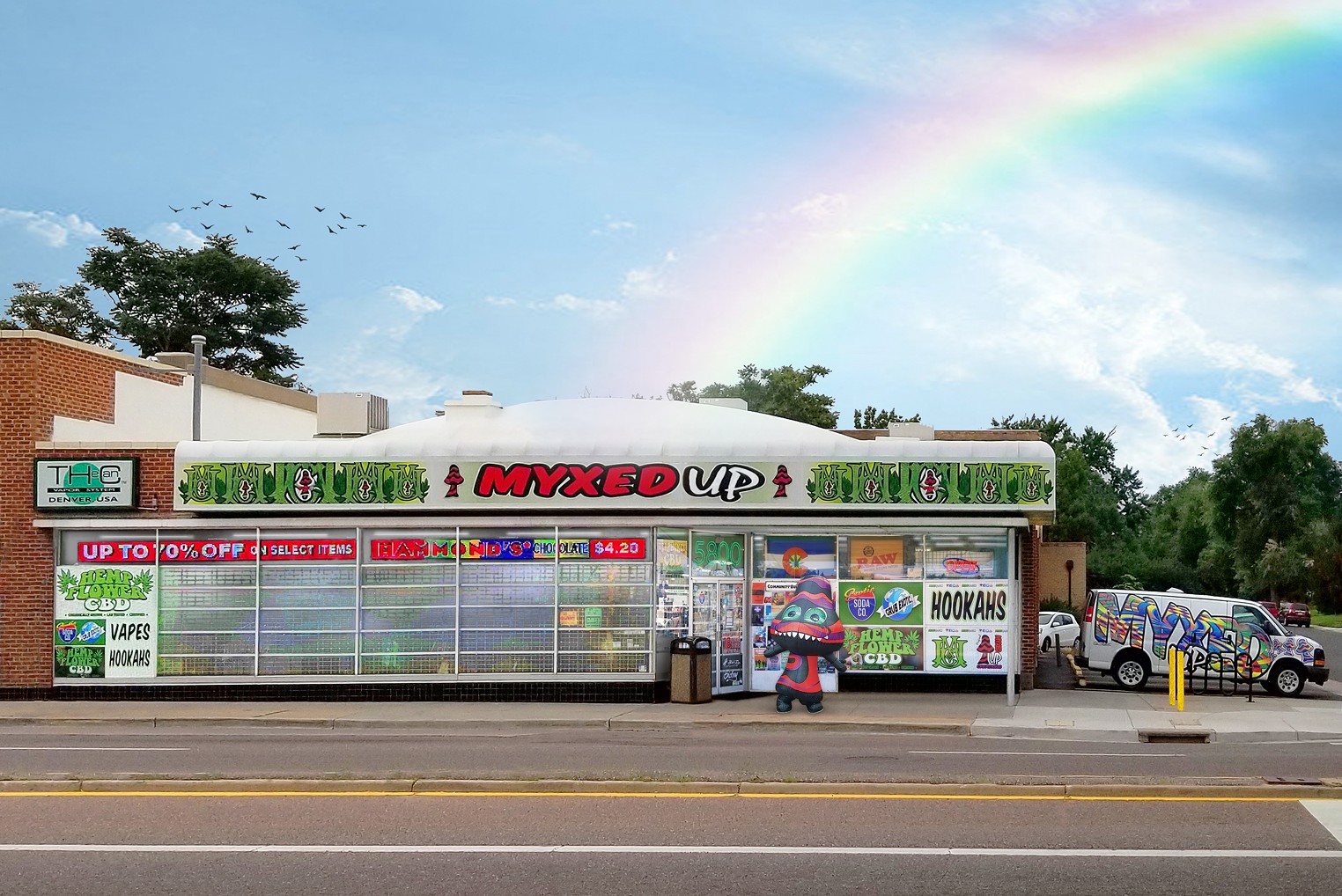 Denver has no shortage of interesting streets and thoroughfares, but nothing touches the strangeness (or length) of Colfax Avenue. Full of all the weird, delicious and intoxicating things, Colfax attracts everyone, but it takes a certain type of character to call it home. Enter Phil Guerin, the founder of Myxed Up Creations.

Guerin dropped out of Colorado State University and moved into his parents’ basement to make clay mushrooms (which are still the Myxed Up logo), but soon realized that glassware and smoking accessories were the money. owner, he started selling pieces at Myxed Up on Colfax in the early 90’s, and he hasn’t looked back.

Although the store has claimed four different Colfax addresses, Guerin never wants to leave. “It was always my wish to stay here,” he says. “I love that street.”

Myxed Up, an old home for cannabis users and the counterculture, is about to celebrate thirty years at the ‘Fax in October. We spoke to Guerin about all the changes he’s seen since opening the shop in 1992, and what he thinks of Denver’s current cannabis landscape.

west word: What has owning a main store been like over the decades? I can imagine the laws and products you sold have changed quite a bit.

Phil Guerin: We were here at the very beginning of what I would call the glass evolution. Denver played a very prominent role in everything that happened with it. There was a warehouse on Brighton Boulevard that made about 1 million pipes a year, and this guy had an arrangement of twenty stations for glass blowing and torches. He’s sold all that since then and Brighton Boulevard is a very different place now, but I met him about fifteen years ago at this time. Everyone thinks glassware started in Oregon, but they produced about 1 million Pyrex pipes here in Denver at the time and then shipped them to California. Everyone thought those color-changing lampwork pipes came from California, but they weren’t.

The novelties came around the late ’80s, and there were acrylic bongs and stuff in the ’70s and early ’80s. When we first started doing this with our Fimo clay pipes, it was something new. But honestly, that company remained relatively unchanged for about thirty years. It was mainly Proto Pipes, Zig-Zags, bamboo rollers, metal chamber pipes and Sneak A Tokes. The next big thing after we got into this was graphics, and we got an ad on the back of High times for a pipe catalog we would send. We made about $1 from each of them, but we made thousands of dollars shipping them. We’ve helped make that sort of thing mainstream. Everything has evolved from there to the technology we see today, be it a volcano [vaporizer] or Puffco Peak. Now you can’t separate this industry from technology.

That reminds me of the first time I came across a Mile High Comics ad in a Spiderman comic book a long time ago.

It was very effective. We took down an entire page, which was a lot of money for us back then, but we really blew it up for Colorado. We were some of the first to celebrate 4/20 as a day. I’m not saying we invented the concept of 4/20, but that was always associated with the time 4:20 PM, not the day [April 20]. We started celebrating that as a customer appreciation day and as an evolution of Earth Day. There were all these people celebrating Earth Day in City Park, so we decided to include 4/20 in it.

How did people react to that idea at the time?

At first, people asked us why we were celebrating Adolf Hitler’s birthday, because that was on April 20. Then it was the same date as Columbine, which literally happened when we put up balloons. We always had to explain it was 4/20 for people, but then we partnered with Cervantes’, and more people and our competition started ramping up for that day too, and it started snowballing. Things like that didn’t happen anywhere else but here. National brands came from New York and elsewhere.

What do you think of the progress legalized cannabis has made in recent years?

It’s sweet because it’s something I’ve fought for all my life. I had to watch a bit on the sidelines as I had a target on my back thanks to years of prohibition. I set out to normalize things and find healthier alternatives and ways to advocate for health. I really feel like Colorado has done things in a healthy way here. I wish the rest of the country would catch up and allow [cannabis] banking, because it affects many people. We also see things being consolidated as these big companies are flooded with cash. Smaller entrepreneurs don’t have that luxury, and a lot of the creativity we saw here a decade ago is a bit stifled. I’d still rather have it this way than not have it legal, and I think we’re better for it. That doesn’t even address the medical benefits of marijuana.

How much has Colfax changed since you first settled there?

We were next door to Casa Bonita for a while, but we had a terrible landlord, and 9/11 happened. There were always tour buses there, and I think they will return now that Trey Parker and Matt Stone have taken over. When we were on the west side of Colfax, LoDo was being upgraded, and so we actually got to see all those people being evicted in the early 2000s. It was kind of a premonition of what East Colfax would look like in a few years.

At the time, East Colfax was run by motorcycle gangs, and there was a lot of prostitution, but there were also a lot of cops. Colfax was the most popular street in this region and there was always attention. There was a lot of drugs and violence then, but there was almost a street order about it. There wasn’t much graffiti. When Bill Clinton put the police on the street, Colfax cleaned up a lot, and Capitol Hill basically moved east. Many bars opened and more people came. That was a positive trend up to Monaco. However, it seems to be a bit stunted in Monaco.

During COVID and since then we haven’t seen much law enforcement on Colfax either. I still don’t see many patrols on Colfax. From the 70’s to now, this is the most lawless Colfax I’ve ever seen. I now see motorcycles racing and doing wheelies at Colfax at 5pm. It’s entertaining and pretty cool, but it’s also gotten out of hand.