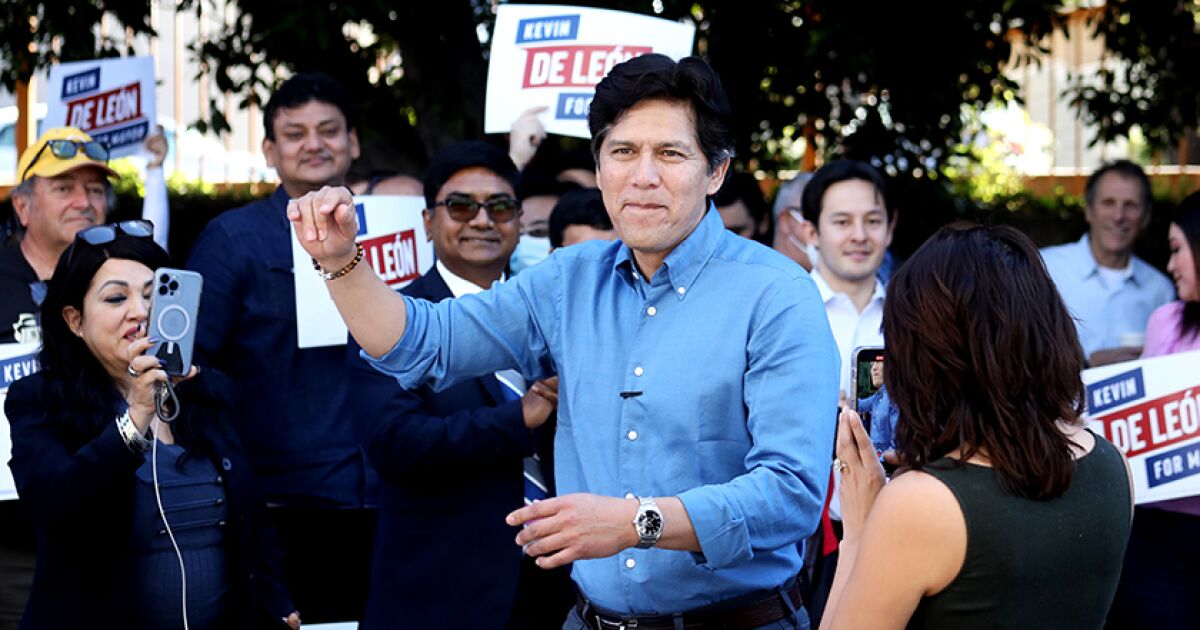 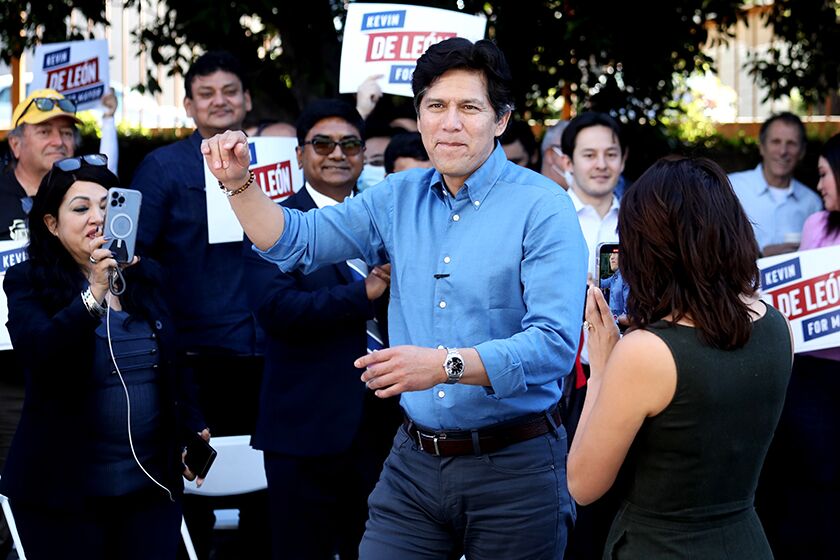 After a week and a half of silence, Kevin de León emerged on Wednesday afternoon to let the world know that he really, really, sincerely regrets what he said, and didn’t say, on the racist recording that rocked Los Angeles.

The embattled councilor appeared on CBS Los Angeles to reiterate time and again that he “failed” to stop a colleague, Nury Martinez, from taking bigoted shots at a string of Angelenos, and another, Gil Cedillo. , of conspiracy to get seats from Black politicians.

“I failed at that point in time to act and close that meeting,” De León told reporter Tom Wait. He asked for forgiveness “from my people, my community for the harm caused by the hurtful words” uttered on the tape.

Also up: an interview in Spanish with Univision host León Krauze, who flew out of the network’s Florida home base. Illuminated in funeral shadows, De León said he felt “terrible” six times over what Martinez, Cedillo and former Los Angeles Labor Federation president Ron Herrera had said about black people, Jews, Armenians, Oaxacans and other councilors. . When Krauze urged De León as to why he was silent, the councilor replied in Spanglish:I was in shock, fully shock.”

De León interrupted his afternoon of apology with a letter to newly appointed LA City Council President Paul Krekorian, writing with “a deeper shame than I have ever known and from a place of deep humility.” The only thing that brought comfort in his difficult times, De León said, was “a community of angels” who came to him with words of encouragement: “I feel like I barely deserve it.”

It would have been a good exercise in repentance – if it were real.

Because you see, in the midst of this forgive-me farce, De León reiterated that, no, he will remain in place despite almost the entire Democratic establishment, from fellow councilors to US Senator Alex Padilla (D-Calif. ) to even ask President Biden for his resignation.

Martinez, who made the most insulting comments, has resigned, while Cedillo remains in office.

De León wrote to Krekorian that resigning “would only be a solution that benefits me — not the people who elected me to represent them.”

He told CBS Los Angeles that he “wanted to help heal the wounds that have been around for so many years, if not decades.”

Meanwhile, he told Krauze that being fired would not help anyone in his working-class neighborhood “because there is still a lot of work to do” with “COVID, unemployment, the threat of evictions and the humanitarian crisis of homelessness.”

His attitude was classic Kevin: selfish, messianic and calculating.

He leans on his reputation as a Latino political giant — longtime immigrant rights and labor activist, former congressman and head of the California Senate — by betting that some will vent their anger because they need someone who knows how to do things for themselves. Latinos have to get it done. He reckons his mostly Latino voters are far enough away from City Hall not to care much about the controversy.

And he thinks that if he throws rocks at Martinez and Cedillo, the public will overlook his sins.

I’ve met Kevin a few times over the years and find him smarter than most. He is funny, hardworking and loyal. That’s why I don’t underestimate his strategy – in fact, it unfolds slowly as I write.

A group of Latino men appeared outside De León’s home this week, demanding that Black Lives Matter-Los Angeles protesters “give him his space.” Other supporters are planning a rally this Saturday in East Los Angeles, which is not in De León’s district, but it doesn’t matter. “Unfortunately,” according to a Facebook post advertising the event, “the political opposition has created a media circus to reduce the number of Latino council members, which will reduce services to our community.”

Friends who have long worked with De León on many of his signature goals—climate change, turning California into an immigrant refuge, gun control, but most importantly Latino representation in California’s power corridors—keep calling me, claiming to lose him now. would be an unpredictable blow at a time when Latinos can afford it the least. Some have even ridiculedly described what happened to him, Martinez, and Cedillo as little better than an execution.

My response, besides toning down the comparison, is to point out that this episode has exposed De León’s worst tendencies, which he shares with another embattled Latino elected official, Los Angeles County Sheriff Alex Villanueva.

The huge chips on their shoulders constantly lower their ambition – and endanger the people they serve.

In the big picture of the tape, De León didn’t say the worst things. He called Councilman Mike Bonin the “fourth black councilor” who “will never peep at Latinos. He will never say anything about us.’

He also likened black political power to the Wizard of Oz — the idea that it’s not all it seems. And he told both CBS Los Angeles and Univision that when he compared Bonin’s Black son to a Louis Vuitton handbag, it was actually intended as a jab at Martinez’s taste for luxury goods — a face-saving low blow to a former ally.

No, what struck me most about De León is how mortified he is.

The leaked tape caught him moaning about how people criticized him for throwing a party at the Walt Disney Concert Hall to mark his ascension as Senate president pro tem “because we Latinos – whether you’re a worker or you’re in the political space are – we are not supposed to fill those positions.” White people would have liked the party if he had held it in El Pueblo, Olvera Street, Roosevelt High or Pacoima, he said.

He mentioned white people six times, from “little white lady” to “white people will cut you in an instant” and the “white liberal world.”

He claimed that when white politicians get caught up in corruption, “they find out what s-.” (Someone tells that to Mitch Englander.)

It’s a side of De León that I’ve noticed from the start – a side that I’ve always felt was among his talents.

When I interviewed him for my 2019 podcast on Proposition 187, the 1994 anti-immigrant voting initiative that inspired a generation of Latino activists like De León to run for office, one of the first things he said was how racist The Times had been. to approve the measure. I replied that while I agreed that the paper was horribly wrong, today’s Times looked very different.

During a mayoral candidate debate on homelessness this month co-hosted by The Times and KCRW, De León answered a difficult question from my co-moderator Anna Scott by playing the dumb Latino immigrant. “I do not speak English,‘ he said – I don’t speak English.

When I replied in Spanish to tell him, well, respond in Spanish, we all laughed – but he still didn’t answer the question.

This is not the idealistic son of a housekeeper from Guatemala, who has accomplished so much in his career. This is a control-hungry pol who believes his own hype – he even talked about himself in CBS Los Angeles’ third person.

Is this really what Los Angeles needs right now? Is this really the best thing Latinos can choose? What De León is doing isn’t an example of leadership – it’s a lesson in how to gaslight a city.

De León, 55, plans to serve out his term, which expires in 2024, and most likely run again if he plots another run for higher office, following failed bids for the US Senate in 2018 and the mayor of LA. this year. There’s nothing anyone can do about it other than a recall.

So I leave him with what he told me in 2019 about how the California Republican Party was wrong in betting its political future on Proposition 187. The measure passed convincingly, but was later declared invalid and eventually destroyed the party.

“It was a short-term delirium for long-term pain, forever,” De León said. And I say to my Republican colleagues, ‘If I can give you some free advice, take it for what it’s worth. I think it’s good advice: this isn’t going to work out for you.’ ”

Kevin, are you listening to yourself?