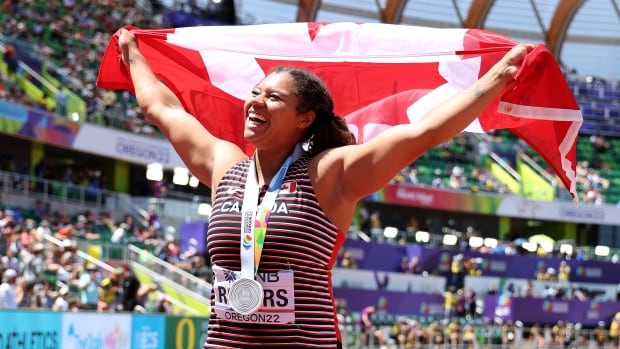 Canadian Camryn Rogers made history at the World Athletics Championships, becoming the first Canadian woman to ever win a medal in the women’s hammer throw.

As the wind howled and the sun clattered at Hayward Field in Eugene, Oregon, on Sunday afternoon, Rogers launched her third throw of the final 75.52 meters, enough to capture silver for Canada.

It is the first time that a Canadian woman has won a field event medal at the World Championships. It is also Canada’s first medal in these worlds.

“I’m so motivated and so excited to come home with this medal. It shows every throw, every lift, this is where it leads.”

The Richmond, BC native scored 75.52 on her 3rd attempt for Canada’s 1st medal at the 2022 World Championships in Athletics in Eugene, Ore.

Brooke Andersen from the US won gold with a throw of 78.96m, while fellow countrywoman Janee’ Kassanavoid claimed bronze (74.86m).

Soaking up the historic moment, Rogers took a tour of the stadium with a Canadian flag draped over her.

Camryn’s mother, Shari Rogers, cheered wildly in the stands next to her fiancé, waving a Canadian flag.

The two shared a hug as Rogers continued her tour of the stadium.

“I felt so overwhelmed with pride and gratitude. Camryn is my hero. She leads by example and I learn so much from her all the time. We’ve been through a lot together,” Shari said.

“She is now a huge role model not only for Canada, but also for women and other girls in the sport. That means so much. She did it and I’m just so proud of her. My shining star.”

The historic moment fully dawned on Camryn when she was hugged by her mother.

“As we did our rounds after that, I saw her in the crowd. She came to the railing and gave me a huge hug and then it hit me,” Camryn said. “When she put her arms around me, I started roaring on the spot.”

The 23-year-old Canadian spoke to CBC’s Scott Russell after finishing 2nd in the women’s hammer throw final at the 2022 World Championships in Athletics in Eugene, Oregon.

Rogers started strong with an opening throw of 72.61m, finishing in second place. She didn’t register her second throw after it hit the net.

But her best was yet to come.

Her third throw was the silver medal winning throw. Rogers stepped into the ring and launched it 75.52 meters.

“I couldn’t be more motivated. My season isn’t over yet. Commonwealth games in two weeks, go there and run it,” Rogers said.

🇨🇦Camryn Rogers basks in this moment at Hayward Field. pic.twitter.com/g44j4bv82o

It was another successful season for Rogers.

The 23-year-old from Richmond, BC, is a three-time NCAA champion, winning her third title just a month earlier. She holds the National and NCAA records in the event.

Rogers also made history with her Olympic debut in Tokyo last summer, becoming the first Canadian woman ever to advance to an Olympic hammer throw final.

She finished fifth overall with a throw of 74.35m. She was the youngest contestant in the final, when only 22 years old, with almost two years.

Hammer throw was Canadian Camryn Rogers’ first sport and now, at 23, she is one of the best in the world.

And her fascination with the sport started just ten years ago while watching the 2012 London Olympics. Rogers was amazed at how strong the women were at the hammer throw – she wanted to be like her one day.

Now she has made history in the event for Canada, and her mother couldn’t be more proud.

“She gives me strength and she doesn’t even realize it. When I see her doing it out there, it’s such an amazing feeling. I’m so happy for her,” Shari said.

“It’s huge. And it shows that we have the power within ourselves to make anything happen.”

As Rogers made her way through the stadium, the men’s 10,000m race began.

Canadian Moh Ahmed, who had suffered an injury in recent weeks, was ready to race.

The 31-year-old long-distance runner wanted to improve his sixth place at the Tokyo Olympics a year ago.

He also finished sixth in the event three years ago at the World Championships in Doha.

Ahmed kept up with the leading group throughout the race and was back in the top six when the bell rang for the final lap.

Despite a daring push to the finish, Ahmed again finished sixth in the event, with a time of 27:30.27.

“I still haven’t finished the 10K. It’s disappointing. I thought I had prepared well. I didn’t like my position in the last 400 meters. I would have liked to have been more up front,” Ahmed told CBC Sports afterwards. the race.

“There was a lot of traffic there and I think I left myself in a bad position.”

Ugandan Joshua Cheptegei won the race in a season-best time of 27:27.43. He became only the fourth man to win world titles in the 10,000 meters time and again.

Ahmed praised the front runners after the race.

Last summer in Tokyo, Ahmed won silver in the 5,000m, Canada’s first distance medal on the Olympic track. This season, he set a national record in the 5,000m indoor.

What makes runner Moh Ahmed so fast in the 5,000 meters?

For more stories about the experiences of black Canadians – from anti-black racism to success stories within the black community – visit Being Black in Canada, a CBC project that Black Canadians can be proud of. Read more stories here.