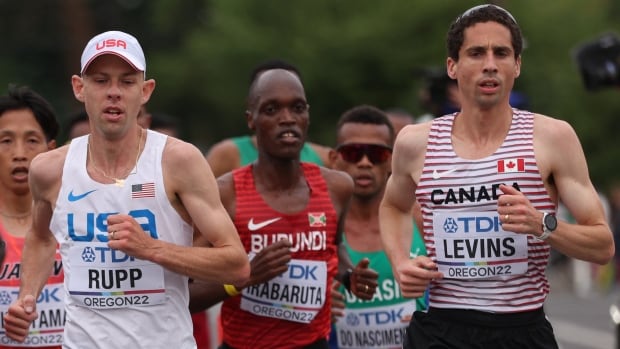 Cam Levins set a Canadian record finish and shattered his own national record with his fourth place finish in the men’s marathon at the World Championships in Athletics on Sunday in Eugene, Ore.

The Black Creek, BC native finished in two hours 7.09 seconds, breaking more than two minutes from his previous national record of 2:09:25 set at the 2018 Toronto Waterfront Marathon.

Peter Maher had the previous best Canadian finish in the men’s marathon at the 1993 World Championships with a 10th place finish in Stuttgart, Germany.

“I really took a lot away from the last Olympics and realized I had to get better in every way,” said Levins, who finished 72nd in the men’s marathon at the Tokyo Olympics.

“I’ve really worked and changed myself as an athlete from last year to this year. I know I deserved this and I deserve to run with these guys. I felt great. I would only have been happier if I was one place would have been higher, but it’s the best race of my life, so I can’t be disappointed.”

Cam Levins (@CamLevins) knew he was a 2:07 runner before anyone else did.

Today, the BC athlete stands fourth in the world with unwavering confidence and focus.

2:07 low. He cut more than two minutes off his Canadian record. pic.twitter.com/sgPyIY9wTi

The 33-year-old said he had “no idea” that his performance was historic.

Tairat Tola from Ethiopia rode away over the last kilometers to win gold in 2:05.36. Teammate Mosinet Geremew took the silver in 2:06.44, while Bashir Abdi from Belgium took the bronze in 2:06.48.

“I think all three of our Canadians ran really, really well today,” Levins said. “We’re in kind of an amazing era of marathon running, and I’m happy to have my name out there with some of the best.

“I’m going, I hope I have a long career ahead of me, and that was just the tip of the iceberg.”

In 2018, in his marathon debut, Levins achieved what had eluded Canadian marathoners for decades, breaking Jerome Drayton’s 43-year record.

But he failed on three attempts to run the Tokyo Olympic qualifying standard before reaching it with a week left.

He posted on social media that he is seeking redemption in Eugene. And has he ever delivered.

This photo is quite indicative of how that race felt! Happy to be selected and super proud to represent Canada again. A chance for some redemption https://t.co/Lpm7bEg4p6

“I’ve really had an incredible build-up, like the last six months, I’ve trained really well, the hardest I’ve got in every way imaginable,” added Levins, who recently won the Canadian Half Marathon Championships in Winnipeg. “When I got to the start, I knew I was ready.”

But the marathon is difficult to predict. Anything can happen in the last 10 kilometers, no matter how well-prepared athletes are, Levins emphasized.

“I felt great the whole race. But despite that it’s still very hard on your legs, hard to keep going like this,” he said. “I felt great, but it was still a tough last 10K. When I got into the last lap I said to myself, ‘I’m here to get a medal, I’m going to do this.’ I definitely told myself I was here for a big performance.

“I think part of the big result is that you always believe that something is going to happen, except you just prepare for it.”

Levins was among a large group at the front on the fast and flat track with lots of nice views. The 30-year-old Tola came loose in the last kilometers.

Fans lined the track several people deep, a welcome sight after so many marathons have been contested in bubbles over the past two years due to the COVID-19 pandemic. Canadian friends and relatives were not allowed to travel to Tokyo for the Olympics

On Sunday, Levins had his parents Barb and Gus, his wife Elizabeth and his in-laws there.

“There were tons and tons of people in the crowd itself. I’ve heard my name countless times. It was super cool. The crowd in Oregon here was so, so amazing,” he said. [My family was] jumping back and forth on the track, I saw them quite a bit. Most of the time I heard my parents, instead of seeing them, I recognized my mother’s voice quite well a few times.”

Levins hadn’t had a chance to find his family in the crowd just minutes after his finish. But he was already thinking about how grateful he was that they supported him.

“It can be hard for your family, someone like my wife, to continue to support me even if I lost my contract and funding in general, so it was really great,” Levins said. “It was a tough year last year. It was also a very rewarding year in training last year. I couldn’t be more grateful to them.”

Levins, who lives a few hours north of Eugene in Portland, is coached by Victoria’s Jim Finlayson.

The runners were able to pick up the pace with a temperature fluctuating at a comfortable 13.9 Celsius with cloud cover. That’s quite a contrast to the conditions at the World Championships in Doha when the men’s marathon was held at midnight to avoid the scorching heat. The temperature was still around 29 degrees.

After a slight delay, 1972 Olympic marathon champion Frank Shorter signaled the start of the race that sent runners along a three-loop course that ended in front of the University of Oregon’s Autzen Stadium. The route wound through the towns of Eugene and Springfield.

Crossing the Willamette River, the trail ran along Pre’s Trail, the bark walkway named in honor of University of Oregon running icon Steve Prefontaine, who died in a car accident in 1975.

The field was missing Kengo Suzuki after the Japanese team had some cases of positive tests for COVID-19. Also not racing was Kenyan marathoner Lawrence Cherono, who was provisionally suspended by the Athletics Integrity Unit after testing positive for a banned substance used to treat chest pain due to a lack of blood flow and oxygen to the heart. .

At 4pm ET, Moh Ahmed from 🇨🇦 will try his first #WorldAthleticsChamps medal in the 10,000 m. But maybe he should beat Calgary-born Grant Fisher.