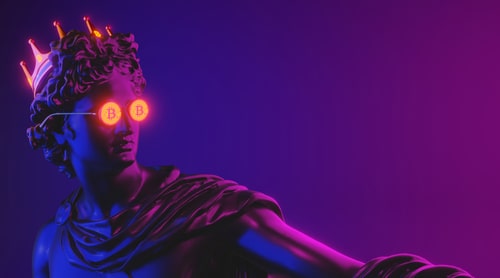 (Kitco News) If Bitcoin were to become a global monetary standard, it would be an “absolute economic catastrophe,” said Paul Brody, Ernst & Young’s global blockchain leader.

The world’s largest cryptocurrency is considered a deflationary asset in the digital space by default. What this means in the crypto world is that the supply is finite – set at 21 million tokens that will ever be minted – and as investors buy and hold Bitcoin, the supply is reduced and prices rise.

“Deflationary systems like Bitcoin are bad for the economy. I don’t think people spend long enough time and attention discussing why. If Bitcoin were to become a global standard, it would be an absolute economic catastrophe,” Brody told Kitco News in a recent interview. “And there are mountains of evidence.”

Deflationary assets are especially terrible as global monetary standards during economic slowdowns. And one of the clearest examples from the past is gold, Brody added, noting that the gold standard failed for a reason.

“There is evidence from before World War II that deflationary systems like gold are catastrophic during economic slowdowns. And the reason for that is in a deflationary model. If you think your currency will be worth more tomorrow than it is today, your incentive to save is and that leads to a collapse in demand, which in turn leads to a further decline in the economy, making people even more paranoid,” Brody described.

This is going to be what Brody calls “a death spiral” for the global economy. “In the run-up to World War II, almost every major industrial country is leaving the gold standard. The evidence shows that the sooner you leave the gold standard, the faster your economy is likely to recover,” he said.

Many Bitcoin proponents refer to the cryptocurrency as gold 2.0, and Brody considers this analogy fair. “Bitcoin is digital gold. If you wanted to take the properties that people love about gold and recreate them in a digital system, you would make Bitcoin. And in many ways, Bitcoin is better gold than gold. The only downside is that you can’t bury it in your backyard,” he said. “But if we get back to a gold standard, it won’t be a good thing.”

With Bitcoin’s popularity booming over the past decade and many proponents calling it a solution to the current global monetary policy system, Brody says it’s worth cautioning against arguments in favor of adopting a Bitcoin standard.

“The system is fundamentally deflationary if the economy it operates in grows faster than the money supply. If the Fed grows the money supply at 1% per year, we have a fundamentally deflationary system. It is true that the number of dollars in the system is a small increase slightly, but the economy is growing even faster, which would cause a deflationary cycle in which the available goods and services would grow faster than the number of dollars chasing them. And therefore the price of goods and services would actually go down,” explained Brody.

How permanent is the current inflation problem?

Fears of inflation and concerns about the Federal Reserve’s ability to contain it with aggressive rate hikes have led to massive volatility in broader markets. Brody disputes this story, however.

The world has experienced multiple massive reconfigurations of the entire global supply chain. And this time, that has been accompanied by large amounts of government incentives, he added.

The idea that the global economy can come out of this with a smooth landing and without inflation is unrealistic. But at the same time, the idea that the world will face stagflation like the 1970s isn’t a given, Brody noted.

“I’m still on what I’d call a temporary team. After World War II, we had a similar global reconfiguration. We went from making a lot of weapons and telling people ‘not to spend and buy war bonds’ to ‘ the war is over, let’s party'”. And the world, especially the US, went through a pretty brutal battle with inflation. It lasted almost three years and peaked at 18%. That was not the beginning of prolonged stagnation. That was a passing event due to a massive reconfiguration of the entire global economy.”

Brody sees signs that inflation in the US may rise above 8% this year. “That inflation cycle after World War II lasted about three years. We are now a year into an inflation cycle. There is good evidence that the cycle has peaked at about 8%, and it will slowly decrease,” he said.

Brody added that there is a possibility of a mild recession, but unemployment is likely to remain extraordinarily low.

Despite Bitcoin being the world’s largest cryptocurrency, there are some red flags regarding the future.

“The main red flag is that blockchains are essentially not just digital assets, they are technology ecosystems. And the big red flag around Bitcoin is that technology ecosystems live and die by the number of developers building products and services on top of them. And that’s what happens. not much of it in Bitcoin,” Brody said.

Most of the development and engineering work takes place in the Ethereum ecosystem. And while Bitcoin appears to be doing well, there are concerns about its long-term future, he added.

Overall, Brody doesn’t see a multi-chain future, predicting that Ethereum is the most likely ecosystem to take over everything.