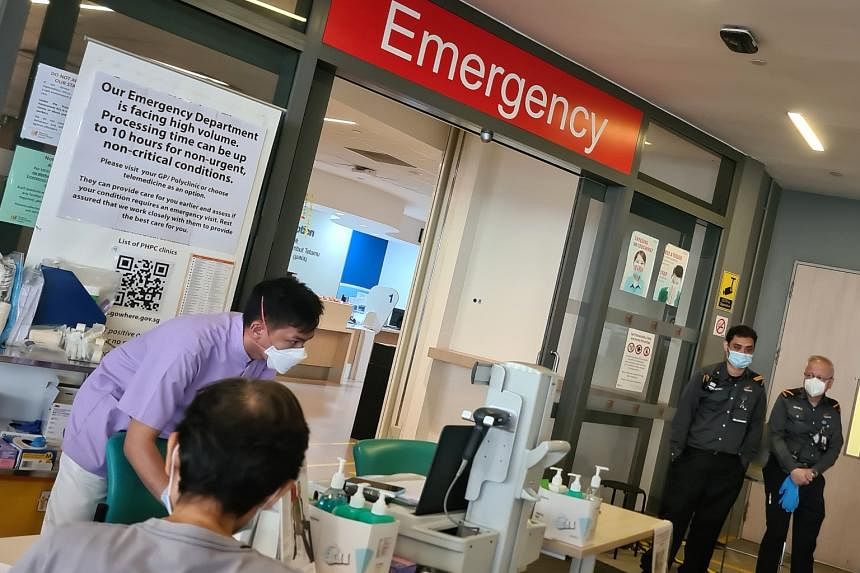 SINGAPORE – The bed crisis in public hospitals is so severe it has spilled over to their emergency rooms, many of which are packed with patients because there is no room to take them elsewhere.

Emergency Department (ED) doctors say there are days when the situation is so bad that an ambulance arriving cannot discharge the patient due to space constraints. Instead, the medical team has to assess the patients while they are lying on the ambulance.

Those in critical condition are treated immediately. Others may have to wait 15 to 30 minutes before space is available so that they can be unloaded and the ambulance can leave.

This also stops the ambulance, which may be urgently needed for another critically ill patient.

The Ministry of Health (MOH) says hospitals will mitigate the situation during peak periods through measures such as adding more beds in wards and creating waiting areas in emergency rooms. At least one hospital has converted a doctor’s office to keep such patients in armchairs when there are no beds.

The Straits Times spoke to several emergency room doctors and nurses, who asked that they and their hospitals not be identified. They say the problem has been around for years, but has worsened this year, partly due to the increase in Covid-19 cases.

They say they are no longer surprised that a patient they admitted was still around when they return to the hospital for their next shift. Sometimes the patient remains in the emergency room for up to four days after admission.

“Patients staying in the ER for days at a time is now the norm,” said an emergency room specialist.

Another said: “I’m not as surprised as before, but yes, still surprised when I see the same patient and next of kin in the ER a few days later.”

Mr Anthony Pragasam, 91, was one such patient. He was taken to a public emergency room of a public hospital at 3:00 PM on September 20 and was officially discharged at 8:00 PM. But he stayed in the ED for two days before being sent to a ward at 6pm on September 22.

Because he was in the emergency room, no visitors were allowed. His son said: “I’m pretty sure he didn’t shower, but I just can’t know because we weren’t allowed in.

“We need to rethink keeping patients in the ER without easy access to relatives, especially the elderly like my father who has dementia, who can’t communicate clearly and ask for what they need. And to keep family members away from the patient for two days without any of us being able to see how he is doing, I don’t think that should happen.”

In August, the longest median wait time for this hospital was 25.4 hours.