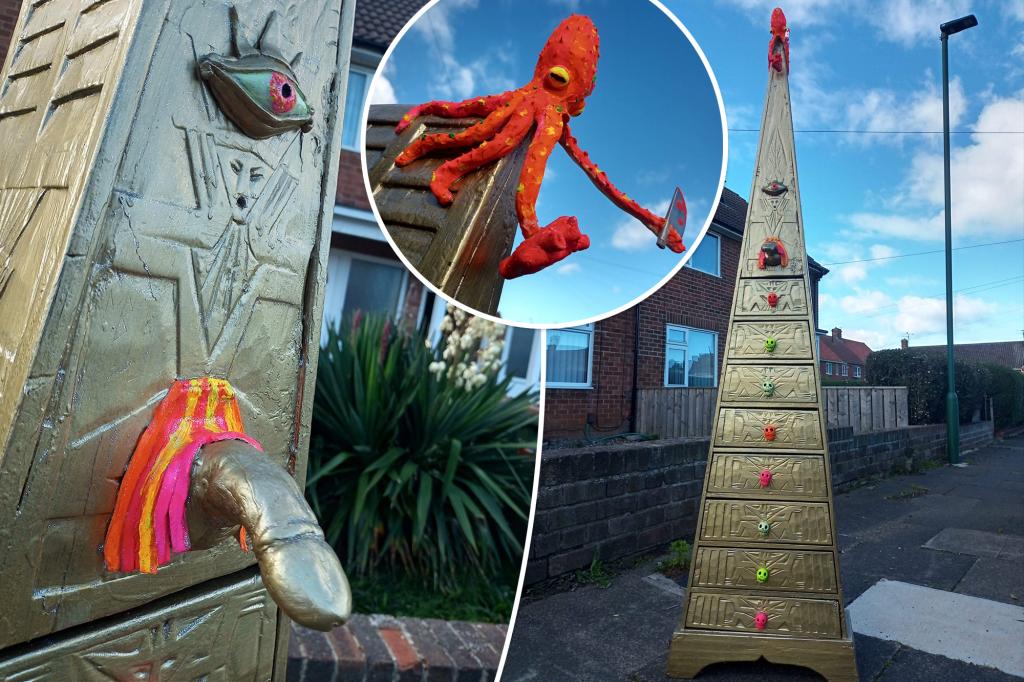 A lecherous woodworker sent social media into hysteria this week by building a gold-plated, pyramid-shaped chest of drawers and adorning it with a gold penis.

Janos Kurucz says his so-called “fertility tower” — which is reportedly selling for $110 on Facebook Marketplace — is an alien-inspired “virility enhancer” perfect for “sex clubs.”

“This is the most amazing opportunity to own a very rare piece!” invites the description of the phallus-decorated furniture on the social media site, Jam Press reported.

The accompanying photos show the pyramid-shaped artwork, painted gold and outfitted with a giant eye and gilded willie like a bizarre obelisk from a lustful alternate dimension.

Meanwhile, each drawer comes equipped with its own custom skull handle and a giant orange octopus straddling the tip of the structure.

Kurucz, 42, a self-employed artist from Redcar, in the UK, told Jam Press that he was inspired to create the “fertility tower” after becoming possessed by a “very intense creative urge” that may have been extraterrestrial in origin. .

“Designed by an unknown artist, some say they were possessed by a powerful alien entity that researched, lived and worked on Earth artists in 1940s Idaho,” reads the hilarious list of the not-safe-for-artwork.

During this time, the alien owned several individuals a la Stephen King’s “The Tommyknockers” and “produced some very underappreciated artwork and furniture designs.” In turn, these Mars-inspired works “give those who possess them insight into realms of infinite knowledge and wisdom,” according to the list.

This particular work is intended to increase the buyer’s ability in the pocket.

“Some also say that these pieces bring good luck and good fortune to the home castles and sex clubs of those who own them,” Kurucz teases about the alleged sex-traterrestrial artifact. “This piece seems to be a fertility and virility enhancer from what one can deduce. I must say it has had a powerful effect on my life while in my possession. I have been strong as a bull…”

Kurucz sums up his purported performance-enhancing piece thus: “This is a once-in-a-lifetime opportunity to own something of a cosmic curio that will radically shift your quantum infinite-reality tunnels, can be used to facilitate astral plane travel and inspire inspiration.” and imaginary quartz fragmentation…”

The Post has yet to verify whether the “fertility tower” is for sale publicly, but the bizarre invention had social media rolling.

“This is the most hilarious thing I’ve read/seen in a long time,” said one stunned commentator, while another wrote, “I think I saw this piece on an antique roadshow,”

“Who in their right mind would want that monstrosity?” gasped another.

“What’s that ac–k for handle?” another commenter wondered, to which Kurucz replied, “Just give it a quick rub and all your earthly wishes will be granted.”

The inventor said he was “blown away by the response” to his epic market prank, which he eventually admitted to posting as a joke.

“It seems to have really made people laugh, and a much-needed tonic for such dark times,” the inventor exclaimed.

This isn’t the first phallic artwork to cause a stir online. In 2017, NYC was ravaged by a giant penis mural erected on a building on the Lower East Side.