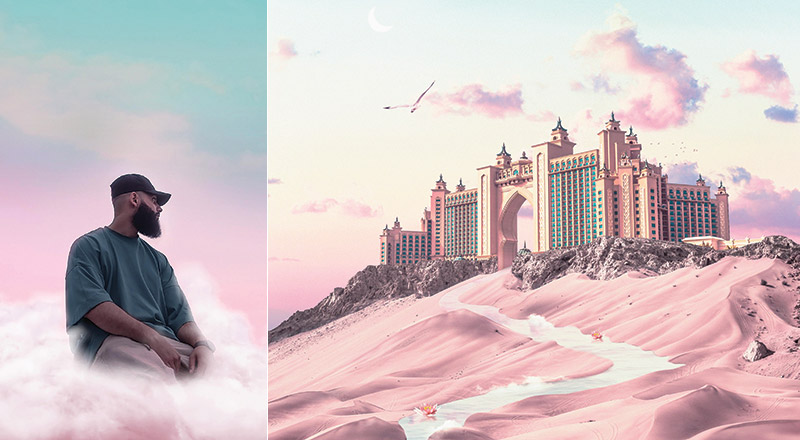 Dubai – the city of dreams. One that is brimming with creativity and acting as a muse for many around the world. One artist who fell under the spell of the city is visual artist Zak Eazy. Originally from Lille, France, Zak works in digital marketing while creating digital artworks in his spare time, although he dreams of a day when he can focus solely on his art.

An avid traveler, his artwork features famous landmarks from his travels. These include the Eiffel Tower and Arc de Triomphe, the Leaning Tower of Pisa, the Taj Mahal and Big Ben in London. Swipe to view his digital artwork on Dubai’s landmarks below:

Eazy fell in love with Dubai in 2021, after being encouraged to visit by friends who are residents. This trip inspired him to create a Dubai series called dream city. Zak’s creative influences include nature, architecture, travel and surrealism, and viewers can see these all reflected in his work.

His first creation in Dubai was Burj Al Arab, with the iconic hotel hued in pink and surrounded by flamingos in the Arabian Gulf. Another landmark he chose to showcase was the Dubai Frame, which separates old and new Dubai. For this piece, Eazy showed the architectural structure in the desert, interspersed with leaping dolphins and an ocean wave. “I really liked the story about the architecture of the Dubai Frame,” Zak told us. “Depending on which side you’re on, you can see the old or the new Dubai – it’s a way of imagining the future.”

His most recent piece shows Burj Khalifa. Reflecting on his first trip to the top, Zak said, “The view of Dubai was just incredible”. When asked when he plans to return, Zak shared his dream of moving to Dubai in 2023. While that dream is still in the works, Zak wants to make more unique adaptations of Dubai and has his eyes set on the Museum of the Future.

For those interested in buying his prints, Instagram is the best right now, but an online store is in the works.

Discover all his creations at @zakeazy