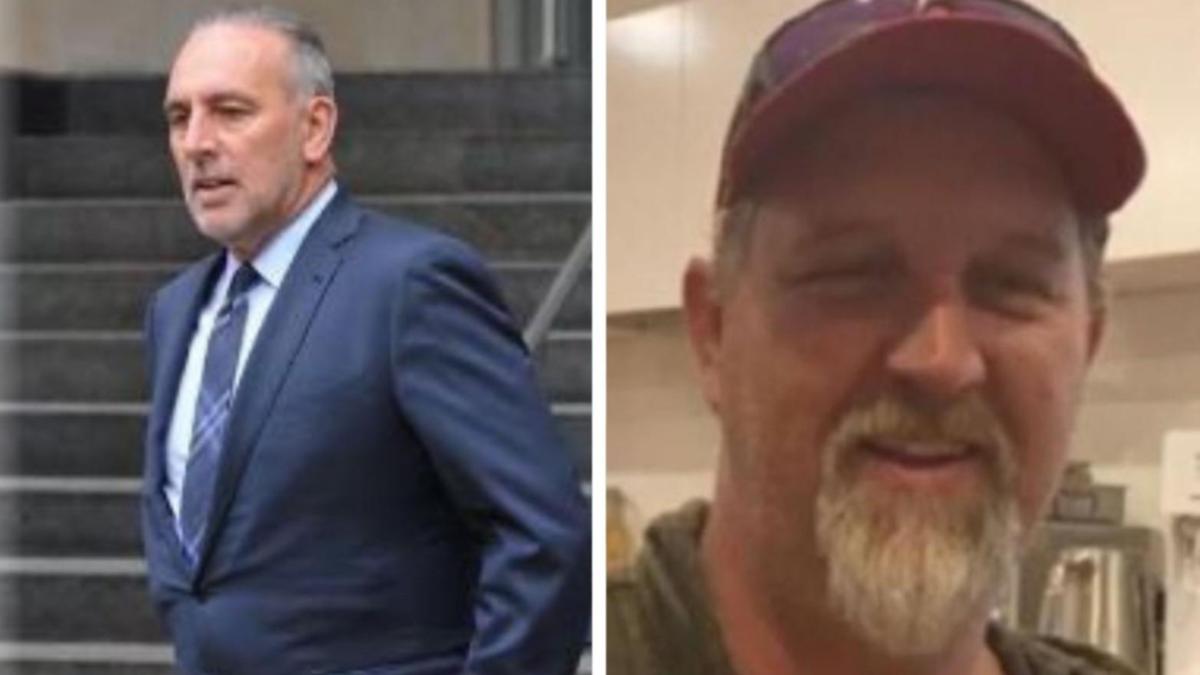 A former youth minister who lit a fire in the grounds of Hillsong Church in western Sydney and scribbled lewd graffiti about megachurch founder Brian Houston has been jailed.

Stephen Anthony Luke, 47, learned his fate in a NSW Mid North Coast courtroom when he was convicted of a five-day crime series, which also included inflicting $1.3 million in damage to a Catholic church in Lismore.

His frenzy began on September 14, 2020, when he approached a 20-year-old woman in a Sydney parking garage, pulled out a 12-inch knife and stole her Volkswagen Polo, phone, credit cards and $375.

He also tried to rob two young women at Hornsby train station, but they refused to go to an ATM to withdraw money, despite pulling a knife on them.

Coffs Harbor District Court learned that he had started a fire on September 16 in the grounds of Hillsong Church in Norwest in Sydney’s northwest.

Using pink spray paint, he scribbled graffiti on the side of the church that the current husband of Luke’s ex-wife “sucks Brian’s c*** like a prison b****,” in a message that referenced church founder Brian Houston.

He then set a fire with an accelerator in the yard adjacent to Mr. Houston’s parking lot, which was extinguished with a garden hose and did not spread.

In all, he caused $3,000 in damage in what Judge Jonathon Priestley described as “a moderately unsuccessful attempt to damage property by fire.”

The court heard that Luke started a new fire at Mr. Houston’s home, but was not charged for the incident.

Two days later he had reached Lismore, where he had set fire to the Catholic Church of St. Carthage with a piece of material taped under the door.

He caused more than $1.3 million in damage by destroying books, photographs and silverware.

“The fire engulfed the great north door of the cathedral and attempts to extinguish the fire caused smoke and water damage to the Episcopal sacristy and the Sacred Heart altar,” Judge Priestley said.

In a Facebook post, he admitted to setting fire to Lismore Cathedral, Hillsong Church and Mr. Houston’s home.

He also referred to conspiracy theories about ‘big pharma’ and the government.

“In another Facebook post, he said he had nothing to lose and everything to gain to live in Christ and die in a hail of police bullets,” Judge Priestley said.

He was arrested on September 19 during a violent clash with police in Lismore.

When he was stopped by the police, he took out a large silver hunting knife and told a cop, “shoot me.”

When ordered to put the knife down, he made slashing motions at the officer before being pepper sprayed and tasered.

He later told officers that he had not taken any medication for his mental health problems for six months and that he had no affiliation with the Hillsong Church.

His lawyer previously told the court that the events were a “wake-up” call and that he would take his medication for the rest of his life.

The court heard that at the time he “felt compelled to obey the voice in his head” and believed it was “part of God’s plan, part of his mission as a soldier.”

He also described his offense as “horrific” and the court heard that he intended to buy a car but blew $900 on the slots and then he robbed his young victim.

Reports from a forensic psychiatrist revealed that he suffered from schizoaffective disorder and that the crime occurred over five days during a period of mental health problems after he stopped taking his medication.

He pleaded guilty to a range of charges, including two counts of willful damage to property by fire and theft while armed.

Judge Priestley took into account his early admission of guilt and gave him a 25 percent discount on his sentence.

He was sentenced to seven years in prison, with a three-and-a-half year non-parole period.

With his time served, he will be eligible for release in March 2024.