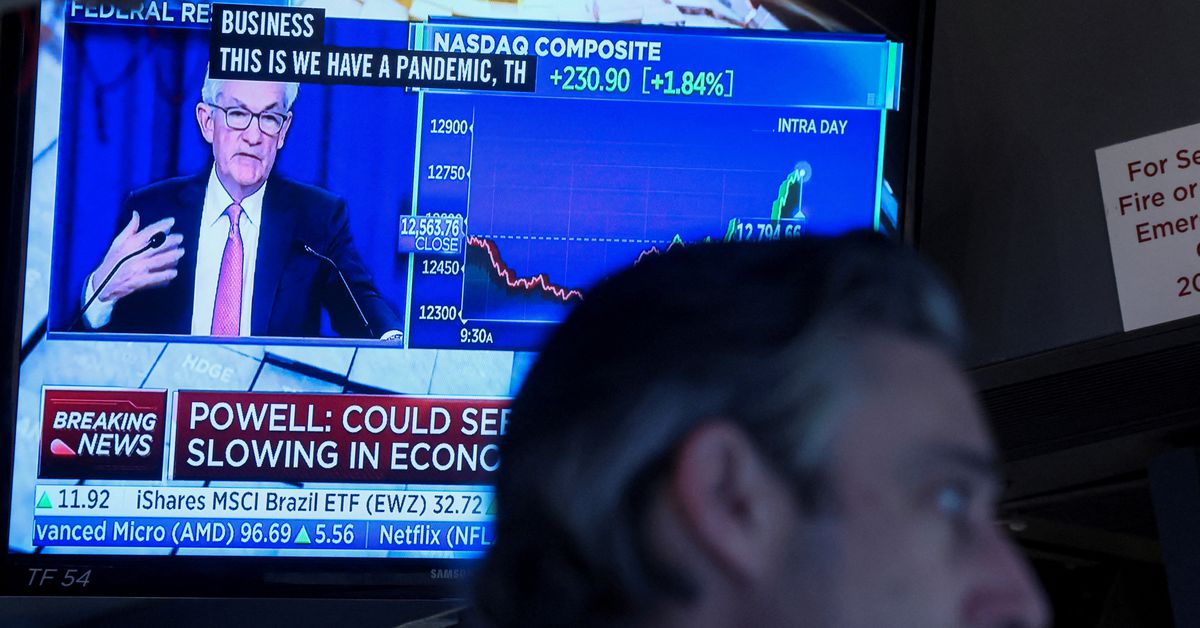 A trader works while Federal Reserve chairman Jerome Powell makes comments on a screen, on the floor of the New York Stock Exchange (NYSE) in New York City, May 4, 2022. REUTERS/Brendan McDermid

NEW YORK, June 29 (Reuters) – Bond traders expect the swings that convulse US Treasuries will continue into the second half of 2022 as investors dispute the Federal Reserve’s projections on how far monetary policy will tighten to avoid the worst inflation in decades.

This is the expected high water level for the Fed’s rate hike cycle. That number has fluctuated in recent weeks, pushing Treasury market volatility to its highest level in more than two years as investors switch back and forth between betting on rising inflation and an economic downturn triggered by the Fed’s aggressive monetary policy. .

The latest twist: While the Fed forecasts rates to peak in late 2023, investors are increasingly betting that policymakers will stop tightening early next year before easing monetary policy in the face of an impending economic slowdown. read more

That has helped Treasury yields, which are inversely proportional to prices, fall over the past week, supporting a rally in US equities that saw the S&P 500 rise 4.5% from its low. Ten-year government bond yields in the benchmark peaked at around 3.5% earlier this month and are now at around 3.1%.

With markets still analyzing how much the 150 basis points of the Fed’s already implemented rate hikes have impacted consumer prices, investors see little sign that Treasury swings will ease anytime soon, adding more risk to a year in which US Treasuries are already contracting. the worst start in their history.

“Nobody really knows how far demand has to fall to bring inflation back to comfortable levels. This makes predicting the Fed’s response very difficult,” he said.

The Fed, criticized for acting too slowly to tackle soaring inflation, has rushed to ramp up its monetary policy response, delivering a jumbo 75 basis point rate hike earlier in June and the raising expectations that further major steps will be taken.

Fed Chair Jerome Powell on Wednesday reiterated the central bank’s commitment to fight inflation, acknowledging the risk that the economy could slow down more than necessary. read more

The Fed’s so-called dot-plot, which shows policymakers’ projections for where interest rates are headed, shows a median interest rate of about 3.8% next year, falling to about 3.4% in 2024.

But concerns about a looming recession have mounted and investors are increasingly assuming that the Fed will be forced to pull out of monetary policy tightening much sooner as growth begins to slow. Money markets are now reflecting expectations that interest rates will hit close to 3.6% in March next year, compared to a projected level of around 4% in that period earlier this month. read more

“Unlike the Fed, which is pricing in the peak in late 2023, the market is projecting a peak in and around late 2022 or early 2023,” said Eric Theoret, global macro strategist at Manulife Investment Management. the market is pricing in a Fed turn much earlier than the Fed has priced in (it).”

How soon that high water mark could come likely depends on economic data, which has shown a mixed picture of late.

While the latest consumer price reading shows that inflation has accelerated in recent months to its highest level in more than 40 years, some expectations of future economic growth have been shaken. read more

Meanwhile, the spread between three-month treasury bills and 10-year bonds was at its narrowest this year on Wednesday, a signal that some investors believe points to concerns about future economic weakness.

Some investors see a parallel to 2021, when rising inflation alarmed markets, even as the Fed insisted that rising prices were a passing phenomenon.

“U.S. Treasuries are way ahead of the Fed in internalizing the growing risk of a recession,” Mohamed El Erian, chief economic adviser at Allianz and chairman of Gramercy Fund Management, wrote in a statement. tweet last week.

A risk to investors’ prospects is that factors beyond the Fed’s control, such as continued high oil prices, are keeping inflation high and forcing policymakers to keep raising rates even as growth falters, potentially leading to further losses in stocks. and bonds.

“I think inflation will be much more persistent than people fear,” said Julian Brigden, co-founder and president of Macro Intelligence 2 Partners, a global macroeconomic research firm.