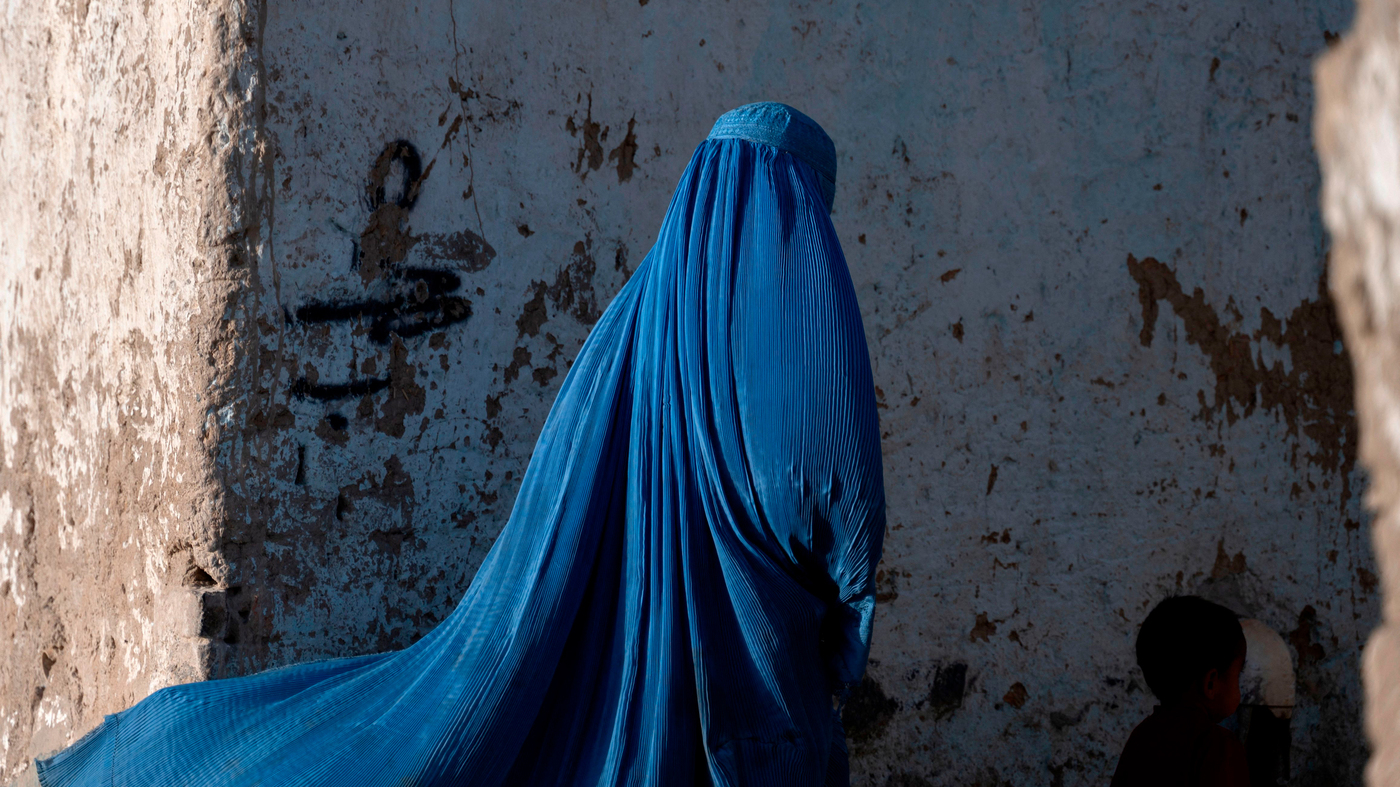 An Afghan woman walks with a child in Kabul, Afghanistan, April 28, 2022. A recently released Amnesty International report, Death in Slow Motion, focuses on a range of issues affecting girls and women. The most important of these are child and forced marriages.

An Afghan woman walks with a child in Kabul, Afghanistan, April 28, 2022. A recently released Amnesty International report, Death in Slow Motion, focuses on a range of issues affecting girls and women. The most important of these are child and forced marriages.

Early Monday morning, just before daybreak, a 23-year-old Afghan journalist packed her bags, quietly said goodbye to her family and left her home in a carefully laid out and carefully executed plan.

“My heart was beating so fast the whole trip, until I reached a safe place. I escaped the brutality of the Taliban and I was afraid they would catch me,” she said. The journalist only wanted to be identified by her initials – FJ – because her family is still under Taliban surveillance in Afghanistan.

She escaped the threat of forced marriage to a local Taliban fighter in her district of northern Afghanistan and moved to another country. “One of their commanders who was only referred to as ‘maulavi‘ [a title given to a religious leader] demanded that my parents marry me to him. They wanted to control and punish me for my work against them,” FJ said, referring to her criticism of the Taliban’s treatment of women and minorities.

FJ said she knows girls from her community, including one of her neighbors, who have been kidnapped and forced into marriage with Taliban fighters in the past year.

Report: Women are trapped in a web of restrictions

A new report released Tuesday by Amnesty International entitled “Death in Slow Motion: Women and Girls Under the Taliban” confirms its claim, stating that “the number of child, early and forced marriages in Afghanistan appears to be on the rise.” under Taliban rule.

The report, which includes interviews with 90 Afghan women and 11 girls in 20 of the 34 Afghan provinces, describes “a web of interconnected restrictions and prohibitions” that has left many Afghan women imprisoned, without control over their work, their education, their freedom. to get around, their clothing – and wedding options.

The report also addresses a range of issues affecting Afghan women living under the Taliban, including restrictions on education, employment, clothing and even freedom of movement. The report also draws attention to the lack of legal opportunities for women to address gender-based violence and protect their rights following the collapse of existing institutions and safeguards since the Taliban takeover.

“Our report documents how in less than a year the rights of women and girls have been decimated by the Taliban,” said Amnesty International researcher Nicolette Waldman and one of the authors of the report.

Waldman said the report was “shocking to research.”

“What really came out during the investigation was how all the restrictions on women and girls are so connected. I would start by documenting a case of forced marriage and then realize that I was also a violation of the right to work or displacement or any number of other violations that only one woman would face in her daily life,” she said, adding that the Taliban’s restrictions are like a “spider web” trapping and ensnaring women and girls.

The number of child and forced marriages is a crucial part of the recently released document.

Rates were already exceptionally high in the country even before the Taliban takeover, with nearly 28% of Afghan women and girls between the ages of 15 and 49 married before the age of 18, according to UNICEF.

While there has been no nationwide assessment to identify trends in early and forced marriages, the report states that there are several indicators pointing to rising rates, including research from human rights and humanitarian organizations such as UNICEF and the Danish Refugee Council. “During its investigation, Amnesty International received several other reports from conservation actors and local activists that child, early and forced marriages had increased in their areas, both rural and urban,” the report said.

Often these marriages are the result of economic and humanitarian crises and widespread famine, forcing many families to marry their daughters younger in exchange for the ‘bride price’ that can help them support themselves.

“In Afghanistan, it’s a perfect storm for child marriage. You have a patriarchal government, war, poverty, drought, girls out of school – all of these factors combined… we knew child marriage was going to be through the roof,” Stephanie Sinclair, director of Too Young To Wed, an organization that works to prevent forced and child marriage, told Amnesty International.

The report documents two cases of forced marriages to Taliban fighters and commanders and received credible reports of several other cases.

“What we read in these reports is only a fraction of the crimes committed by the Taliban against the women in Afghanistan, who are living their darkest hours,” Huda Khamosh, an Afghan activist in exile who was arrested by the Taliban for protesting, said earlier. this year against NPR. “It is difficult to do a thorough investigation of the Taliban. We hear many cases of women committing suicide to escape the brutality of the Taliban,” she said, referring to reports of women in Afghan media.

The Amnesty report also interviewed relatives of girls and women who said the Taliban used their positions of influence and power to enforce marriage, despite the Taliban’s decree banning forced marriages. A decree issued by Taliban chief Hibatullah Akhunzada in December 2021 stated, “Both men and women are equal and no one can force women to marry through coercion or pressure.”

Former humanitarian worker Mohammad Farooq shared a story he knew from his community. “About eight months ago, the governor of the Taliban district, who must be almost 45 years old, married one of the young girls from the district, who was 17 years old. She was against the marriage, but the Taliban are powerful and have complete control over the area. They also paid her father a million Afghani.” Farooq requested that his location be kept discreet, as revealing his location would put him in danger.

Farooq added that he has known 10 such forced marriages in his district alone in the past year.

However, he refuses to harshly condemn the families. “The kind of pressure they face from the Taliban is unimaginable. Not only do the Taliban have power, but they don’t oppose the use of force when necessary. Families don’t have the choice to say no,” he explained. adding that there are no more mechanisms to complain. “The religious scholars, judges and village elders who could have intervened earlier are also afraid of the Taliban. So who can approach a woman who is forced to marry?”

FJ, the journalist who fled her home, agrees. “She [the Taliban fighters forcing girls to marry] had the support of their leadership because they were so confident when they did this [threats and kidnapping].

“I was lucky enough to be able to escape to a neighboring country for the time being, but my life is in limbo because I can be deported at any moment. But there are so many women I know who had to marry the Taliban because it is not easy to to leave if you are.” a woman,” she said.

A call for change, worries about the future

Meanwhile, FJ remains deeply concerned for the safety of her family, who remain under Taliban surveillance. “They know I left and that’s why they harass and shame my family. I’m so afraid that they will hurt or kill my parents for supporting my freedom,” she added, holding back her tears.

“I am in a very bad mental state; I was the voice of Afghan women, and overnight I became voiceless, with no rights, and no one to fight and defend my rights. ever through what I’ve been through,” she added.

Ruchi Kumar is a journalist covering conflict, politics, development and culture in India and Afghanistan. She tweets on @RuchiKumar

Hikmat Noori is an Afghan journalist who covers the intersection of culture and politics in South Asia. He tweets at @noori1st