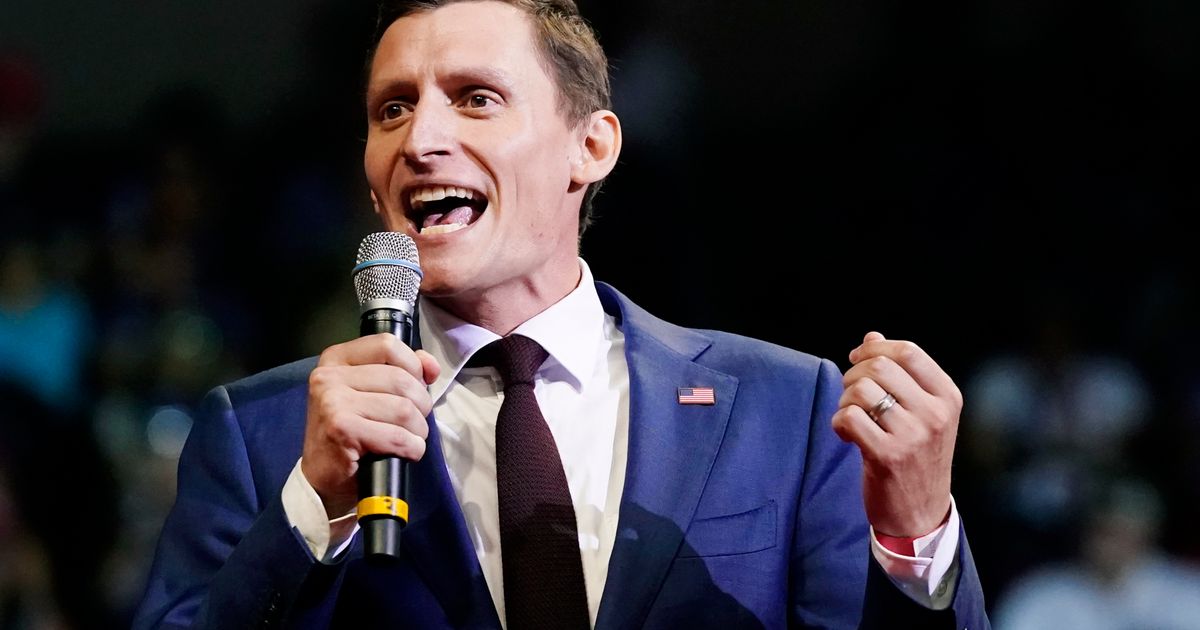 PHOENIX (AP) — An interviewer asked Blake Masters, Arizona Republican Senate candidate, to pick a “subversive thinker” about who people should know more about.

Masters thought about it for a moment and came up with a risky response for someone running for elected office.

He chose the Unabomber.

“I’ll probably be in trouble if I say this,” Masters replied. “How about like Theodore Kaczynski?”

Masters was careful to point out that he did not condone the bombings that killed three people and injured dozens between 1978 and 1995 and terrorized the country until Kaczynski’s arrest in 1996. But Master’s March interview on an obscure podcast is typical of its provocative style. which helped the 35-year-old candidate connect for the first time with the segment of Republican primary voters eager to confront Democrats, tech companies and other enemies of the right in the midterm elections.

Buoyed by Donald Trump’s endorsement, Masters garnered most of the attention in a primary defined primarily by allegiance to the former president. The winner of Tuesday’s election will face Democratic Senator Mark Kelly, one of the GOP’s top targets.

The primary doesn’t easily fit the Trump vs. GOP branch that defined so many competitions this year, including the race for Arizona governor. All the major candidates aggressively sought Trump’s imprimatur and were not shy about putting forward his false claims of electoral fraud in the 2020 presidential election. GOP Gov. Doug Ducey refused to run and the mainstream of the party has not converged around a particular candidate.

Masters faces businessman Jim Lamon, who founded and sold a solar energy company, and Attorney General Mark Brnovich, who started the race as the best-known candidate but came under fierce criticism from Trump. Retired Major General Michael McGuire, the former chief of the Arizona National Guard, and Justin Olson, a former legislator and member of the Arizona Corporation Commission, are struggling to gain traction.

As for the Unabomber, Masters said he doesn’t endorse all of Kaczynski’s views, but “there’s a lot of insight.” Kaczynski’s 35,000-word manifesto, which blames technological progress on societal problems, has gained a loyal following.

“He had a lot to say about the political left, about how they all have inferiority complexes and fundamentally hate things like goodness, truth, beauty and justice,” Masters said.

Despite a venture capital career closely tied to Silicon Valley startups, Masters acts as a critic of Big Tech and calls for regulation of social media giants like Facebook, which he says is unfair to conservatives.

It’s an interesting position for a candidate who owes much of his professional career to Facebook’s first investor, billionaire Peter Thiel. Masters took a class from Thiel as a law student at Stanford and formed a lasting bond. They wrote a book together, Masters worked for Thiel’s investment firm and foundation, and the billionaire now finances Masters’ run for the Senate through a superpolitical action committee to which he has contributed $15 million to date.

Masters was once a strident libertarian whose online posts as a student have been fodder to his rivals. He called for unrestricted immigration, writing that “the US has not engaged in a just war for over 140 years,” a period that notably excludes World War II. Masters later told Jewish Insider, who first reported on the comments, that he “went too far”. He has criticized his rivals and the media for dwelling on his writings for a long time as a teenager.

More recently, he is an immigration hardliner who espouses the “great replacement theory,” accusing Democrats of trying to flood the nation with millions of immigrants “to change our country’s demographics.” Calling Democratic leaders “psychopaths” and posing with a gun, he stated “this is designed to kill people,” and said the Second Amendment is not about hunting.

Trump’s support has been “great for my campaign,” Masters said, and he has no intention of downplaying the endorsement if he is nominated.

“You know how many independents I meet who say, ‘We’re sorry, we voted for Biden. Please bring back the mean tweets, because we want $2 gas, we want a limit,’ said Masters.

After trying hard but failing to get Trump’s approval, Lamon says the former president was wrong about Arizona. During a recent campaign stop in Tempe, he claimed that Trump supported Masters because of business ties to Thiel.

“All this writing that Masters did about open borders, open free drug trafficking and blah, blah, blah — I don’t think President Trump knew that when he approved it,” Lamon told a woman who wanted to know why Trump didn’t support. it. He later said he was not concerned about alienating the former president or his supporters, referring to Dr. Mehmet Oz in Pennsylvania as another example of Trump giving poor endorsement to a Republican Senate candidate.

“How’s Oz doing for us? Oz has a boatload of experience compared to Masters,” Lamon said in an interview, pointing to polls showing Oz is chasing Democrat John Fetterman.

Lamon, an army veteran, draws on the fortune he has built during a career in the energy sector.

“He would let the border patrol do their job,” said Bob Wallace, a 68-year-old retiree from Mesa who supports Lamon. “Not playing a nanny for thousands and thousands of illegals. He would rather they do their job, which is holding them back at the border.”

Brnovich, in his second term as Attorney General, is the only major candidate with experience in elected office. But he’s seen his star fade since Trump soured him for not delivering what Trump wanted most: charges against election officials who he believes, without any evidence, illegally robbed him of a second term as president.

Brnovich initially oversaw the integrity of the 2020 election and sat alongside the governor and secretary of state in approving the election results. More recently, he says he is investigating discredited allegations of irregularities in Maricopa County.

During a recent debate, Brnovich was repeatedly mobbed by the crowd as he tried to speak.

“Look, I respect you, please respect me and let me finish my answer,” he finally clapped back. “If the truth hurts, shut up, okay? Just let me talk.”

Kelly will be a formidable opponent to anyone coming out of the primary GOP. Kelly, a former astronaut and naval pilot, is the husband of former Rep. Gabrielle Giffords, who survived an assassination attempt. He has worked to build a profile as a moderate since he was elected in a 2020 special election to end the term of the late Republican Senator John McCain.

A fundraising powerhouse, Kelly has raised $52 million through the end of June for what will likely be one of the most expensive campaigns in the country this year, with half of it still in his bank account. He uses that fortune to bolster his image with a barrage of positive television ads while keeping Republicans focused on each other.

Republicans, meanwhile, have struggled tremendously with fundraising. Together, the candidates have collected less than half of Kelly’s loot, and much of that money comes from Lamon himself.