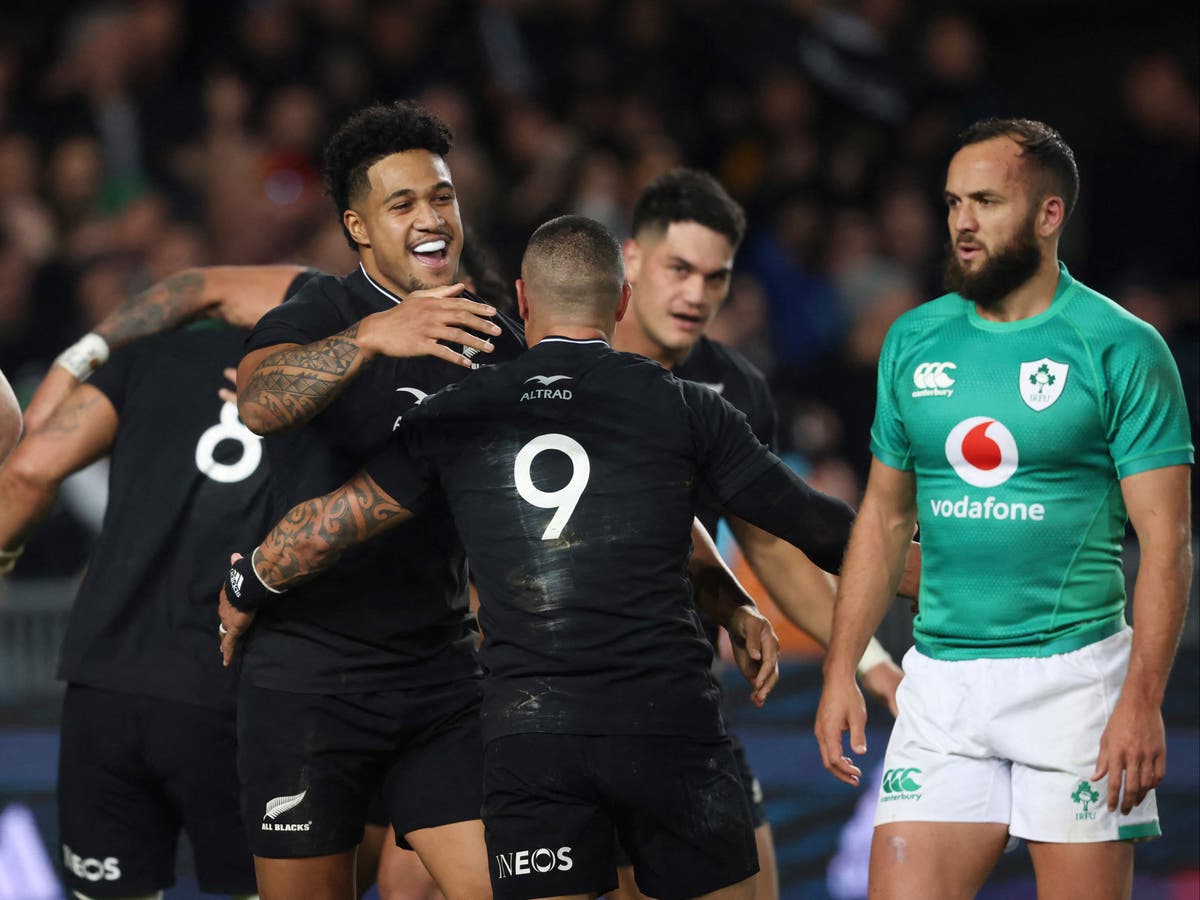 Ireland awaits a win against New Zealand on New Zealand soil after the All Blacks went on to take a 42-19 win on Saturday in the opening game of the three-game series in Auckland.

Number eight Ardie Savea scored on either side of halftime to help New Zealand avenge a 29-20 loss in Dublin last November and extend their unbeaten run at Eden Park to 47 tests in 28 years.

Ireland dominated early exchanges, picking up a try via winger Keith Earls, repeating the feat by center Garry Ringrose shortly after the break and scoring a late consolation via Auckland-born Bundee Aki.

Full-back Jordie Barrett scored a try and converted all six for the All Blacks, while winger Sevu Reece, center Quinn Tupaea and debutant loose striker Pita Gus Sowakula also crossed to help the hosts make it 1-0.

Follow all of Eden Park’s reactions below with our live blog:

The second half is over!

The two sides come back out. England have already lost once to a 14-man squad this summer after an Australian second row was sent off – what prize on two wins?

I think Eddie Jones will be relatively happy with the way his side won their clashes in that half, but he will hope they can open the Australian more confidently when they start to get tired. His halftime coverage will be key – England probably don’t want to be dragged into something that is getting messier, but their pace of attack was good overall.

Australia, on the other hand, could appreciate more sloppiness. Samu Kerevi and Michael Hooper had excellent halves.

Even before that incident, there was quite a bit between Darcy Swain and Jonny Hill. I think a two-handed push to the Australian’s face by Hill went unnoticed before.

Six each as the teams trot back into the barns. You’d say that’s reasonable after a physical half that never quite got into gear.

It may be all square, but Australia is definitely against it. After losing Quade Cooper five minutes before kick-off, Dave Rennie has also seen Tom Banks and Allan Alaalatoa leave with arm and brain injuries respectively, before Darcy Swain’s moment of madness ended his evening with the flowering of James Doleman’s red card. Among other things, Jonny Hill will come back after his yellow card about a minute into the second 40 – and England will have a player advantage after that, which feels like it could be the key in a battle of attrition.

A second penalty for Noah Lolesio and that’s half that.

A penalty for Australia and they will make one last attempt in the English defence, choosing to keep the game going by kicking directly for the ball.

Tom Curry thinks he has won a turnover but his first attempt is not rewarded and his second attempt to get the ball from Rob Leota comes when he is not on his feet. Another penalty for Australia, this time bang up front, and I think we might all be square at half.

Neither side has quite clicked yet. Owen Farrell has a choice between Freddie Steward on short ball or Danny Care in the back, and he might pick the wrong one as Care gets a bit of a tonking from Samu Kerevi after trying to catch Farrell’s floating pullback.

Darcy Swain is still shaking his head as he emerges from the locker rooms and sits down next to a pensive Quade Cooper.

Australia knocks in midfield. Joe Cokanasiga, who played a bit of six at age group level, adds body to the England scrum with Courtney Lawes in line; Andrew Kellaway, who I doubt has too much experience at flanker, is doing the same for Australia.