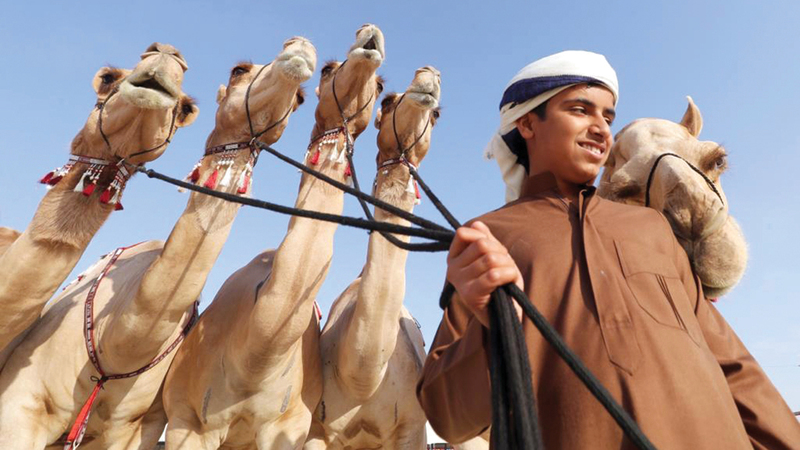 Under the patronage of His Highness Sheikh Mohamed bin Zayed Al Nahyan, President of the State, the Al Dhafra Festival will be launched in its 16th session from October 28 to January 31, as part of the Camel Festival season in the Emirate of Abu Dhabi, hosted by the Abu Dhabi Cultural and Heritage Festivals and Programs Management Committee.

The festival comes as a continuation of His Highness Sheikh Mohamed bin Zayed Al Nahyan’s support for heritage conservation projects, the promotion, development and development of heritage festivals, enabling camel owners to continue breeding and caring for camels, as well as supporting from those interested in falconry competitions, purebred Arabian horses and heritage competitions, which made Abu Dhabi a unique model for organizing traditional festivals.

The festival sheds light on the role of camels in the culture and heritage of the UAE and the countries of the Gulf Cooperation Council for the Arab States of the Gulf, through camel auctions in Abu Dhabi for the original breeds of the local, Majahim, purebred and Wadhh hybrids. The festival includes in the following session: Mazayna Sweihan, Mazayna Razeen, Mazaynat Madinat Zayed and the closing festival (Al Dhafra Festival).

The Al Dhafra festival aims to unify the norms and conditions, intensify the efforts to achieve success in the auctions, increase the number of camel owners participating in the auctions, maintain the purebred camel breeds, increase the demand for buying and selling contribute to the development of domestic and Gulf tourism, stimulate economic activity, highlight the region and promote The Abu Dhabi Center should be the premier destination for camel auctions and to maintain its position as a regional and global platform for heritage strengthen, shed light on the Emirates and Arab heritage in camel auctions and revive it, and bring the UAE’s civilized and humane message to the world, as well as promote the values ​​of loyalty and belonging through the practice of authentic Emirati- heritage.

The festival will also witness many competitions and heritage events accompanying the closing of the Al Dhafra Festival, including: Falconry Competition, Al Mahlab Competition, Purebred Arabian Horse Racing, Arab Saluki Heritage Race, Falcons Matching Competition, Arabian Saluki Competition, Shooting Competition , and Sheep Muzzaina Contest, the Dates and Packing Contest, the Sour Milk Contest and the “Put the Seating” Contest, in addition to many heritage and cultural events, the popular market and outdoor markets (Million Street) and Al Dhafra booths reflecting the passion of the Emirates in particular and the peoples of the Arab Gulf region in general.

The Abu Dhabi Cultural and Heritage Festivals and Programs Committee confirmed that by organizing the Abu Dhabi camel auction season and a number of heritage festivals and cultural programs, it aims to enhance Abu Dhabi’s leadership position and its role in enriching Arab and Gulf heritage and cultural scene, in implementation of its plans to promote culture and consolidate the Emirati heritage and consolidate its values ​​and transmission to successive generations, highlighting the importance of heritage and its major role in the development of peoples and the consolidation of their cultural identity with the development and development witnessed by the state in various sectors.

The event will witness competitions at the end including: falconry competitions, mahlabs, falcon auctions, purebred Arabian horse racing and the traditional Arabian Saluki race, among others.