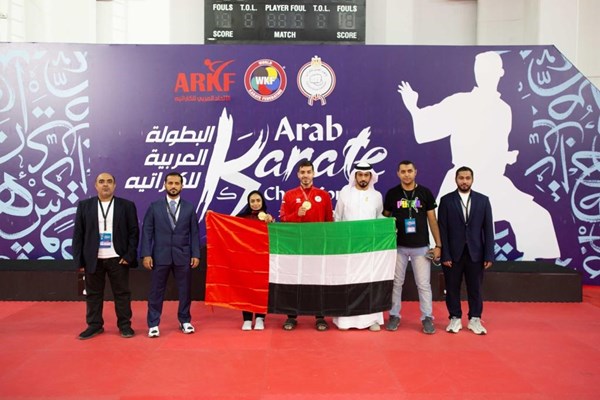 On the first day of the Arab Championship for Men and Women, to be held in Cairo, the karate team won 5 medals, divided between 3 gold and 2 bronze.
Marwan Al Mazmi won the men’s singles kata gold, Hawara Al-Ajami the women’s under 50 kg kumite gold and Fatima Khasif the women’s under 68 kg single kumite gold.
Ahmed Salem Basalib won the kumite bronze in the men under 67 kg, and Muhammad Jassim Al Ansari won the kumite bronze in the men under 75 kg.
Marwan Al Mazmi expressed his delight with the gold medal, saying: “A beautiful match that we have seen in the tournament, and the aim of the players was to fly the flag of the country in the current version, which is more than happened once, and my happiness with my colleagues is indescribable, in light of this achievement confirming the development of karate in the Emirates, in light of the great interest paid by the Game Association, and “M” Nasser Abdul Razzaq Al-Razouki, President of the UAE and Asian Federations, Vice President of the International Federation.